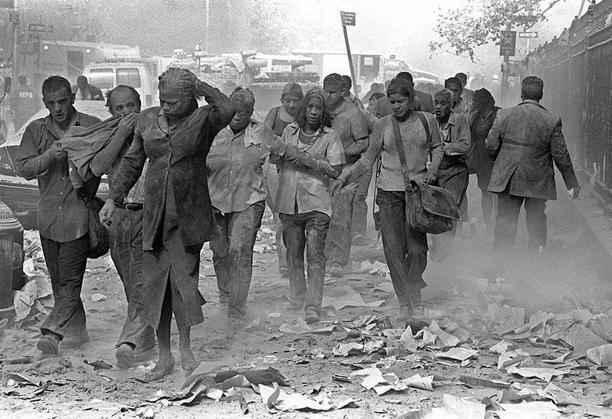 Part of the agony people went through on the day of an attack that can never be forgotten. The twin tower came down lives and 4000 perished (Courtesy:The Atlantic)
The world has seen the photos of the twin towers falling after they were hit by planes. The world has heard about the number of the dead.
There were also survivors who agonized through the sad experience to be alive.  And the people around the world can never forget the breakings news "America Under Attack!
Close to 4000 lives lost, aside from the beautiful monument regarded at that time, as the world's tallest. The loss was great.
But how could a man decided to commit such a heinous crime against the most powerful country on earth and thought he would not himself be haunted?
And that unprovoked attack and the monumental loss led to the beginning of two wars, to get Osama bin Laden, the mastermind of the attack in the wood of Afghanistan, then under the control of the Taliban. The war in Afghanistan was followed by the Iraq's engagement by the allies, to disarm Iraq of the weapons of mass destruction, which never existed.
Observers believe that there is a lesson, which has been learned from the iraq imbroglio, to serve the need of approaching the the handling of Kim Jong un, the North Korea's leader, whose penchant for amassing missiles and threatening America, for no justifiable reason.
​   As Americans remember the attack of September 11 2001, one thought in the mind of majority of people is that this day can never be forgotten, not only by Americans, but by people all over the world. Secondly that such must never happen again, to allow ragtag dissemblers the avenue to attack the country, an attack against innocent civilians at peace time.
Although, nothing was found in Saddam Hussein's Iraq, but his own loquaciousness is believed to have put him in harm's way. Jong un is worse, worse and worse. One reason that absolved the allies of the attack on Iraq was Hussein's statement to the fact that he had the power to humiliate the allies in any attack against his country.
Jong un has put North Korea in a worse situation. And observers say he has to be prevented from repeating a September 11, scenario, an attack the world can never forget.
​
Widget is loading comments...
NEWS AND FEATURES
News & Features Around The World