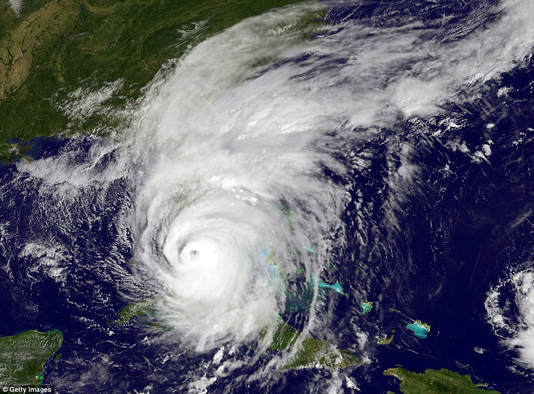 Hurricane Irma arrives Florida's coast as misfortune (Courtesy: Daily Mail)
No person is supposed to be a victim of any form of destruction. But fate does not share that belief. And mother nature does not ask questions about identity of people, when it comes with its onslaught.     The misfortune of some people having bad experience at a certain location does not mean that everyone at that location shares the same experience.
But out of empathy for people affected by misfortune, we all can be affected by their experience of loss, just like it is often noticed in cities under terrorists attack, when people other locations identify with victims' fate.
The same was experienced when Hurricane Harvey turned Houston into a pond of water. Although not the entire Houston was affected as  news reports said there were areas of dry land in the city. But people in the city unaffected by Harvey and people beyond the city ....identified with the damage caused to the city by Harvey.
When Irma devastated the Caribbean Islands on its way to Florida, the entire populace around the world turned attention to the devastation in the affected Caribbean islands. Manyany people felt that the devastation should never have happened and that no entity should have business causing havoc to the human community.
Watching Irma coming from the Caribbean with fangs of destruction prepared the people in Florida for the evil that ahead or the one everyone talked about as coming from the sea and how to avoid becoming victims. Irma was changing its form in term of strength and by the time it was near Florida, it turned into Category 4 from 5. Meaning possibility of landing with more trouble and destruction. But then, the people in Miami-Dade County suddenly became a little fortunate with the change of Irma's direction from the county to Tampa.
The Florida governor who have all the the time or most of the time been at Miami-Dade, where all attention were focused based on meteorological reports about Irma's direction, forcibly turned his attention calling on residents in Tampa to leave. Not all governors in the country shared the same misfortune that the Florida governor had with Irma's journey toward Florida. And before Florida's governor's experience, the Texas' governor had what people considered the worst experience before the unenviable experience of  Florida's governor.
A guy in New York City said during a random interview that he was happy that he did not share part of the Texas and Florida's residents experience of panic, unlike when Sandy came to the North East and residents in the North East went into panic, experience destruction, when people in other parts of the country and the world watch as spectators. .
Remember the Tsunami and the number of casualties and unquantifiable destruction. It affected just a fraction of the universe, while the remaining part acted as spectators and aid givers. Fortune and misfortunes affect just a fraction and it has never happen for the entire universe to share same experience.
Even prophesies of the last day have not said anything about uniform treatment. What the world has heard time and time again is that some people will go to heaven and others to will head to hell. When Ebola broke out in some parts of West Africa, some other parts and the world shut their doors to people from affected countries.
It is about the management of fortune and misfortune, grasping fortune and running away from misfortune. Everyone wants fortune, but nobody wants to have anything to do with misfortune. Everyone wants wealth, some have it and some don't. Everyone wants good health, some have it but some don't. Every wants to be citizens of advanced countries, some are and some are not.
It is fortune to have what you want, and it is misfortune to have what you don't want. No one has control over how fortune and misfortune are distributed around the world and among the human population.
Widget is loading comments...
NEWS AND FEATURES
News & Features Around The World