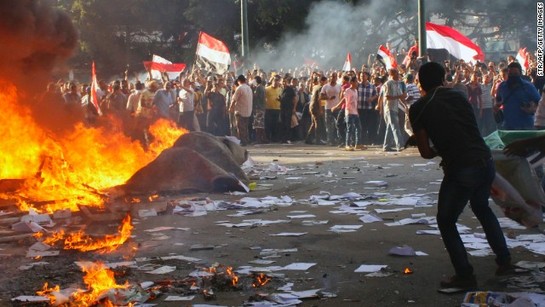 A state of terror in Egypt
The decision of the government in Cairo to classify the Muslim Brotherhood as a terror organization raises a question about the definition of terror. It is not that people already don’t know the meaning of terror, but development often creates a need to search and confirm what we already know to ascertain the truthfulness or otherwise.
Accordingly, the Free Miriam Webster says terror is something that causes very strong feelings of fear: something that is terrifying; violence that is committed by a person, group, or government in order to frighten people and achieve a political goal.
With the definition of terror ascertained, part of Pope Francis Christmas speech that true peace is not a balance of opposing forces is appropriate here considered along the loss of over 800 defenseless protesters in Egypt as an action of a military trying to suppress terror with terror.
It is obvious that calling someone or an organization a terror as has been done in Egypt depends on who is doing the calling. A government may call an organization a terror; an organization may call a government a terror like what the world has been witnessed in Egypt. And based on events in recent times, the world now knows it is possible for governments to resort to terror to quench terror. It has happened in Egypt. It is happening in Syria. It has happened between the civilized world and the Jihadists.
People have been saying it that it is about showing which terror has more terrifying power and the show of power that is more daring and powerful. Anti war people have never failed to tell the world that war is terror.
The Jihadists has the power to attack defenseless civilians and killing thousands when they ran aircrafts on the World Trade Center in the United States and the civilized world cried terrorism; but the civilized world had proved an application of more terrifying power in pursuing the Jihadists to their den to neutralize their terror. When governments decide to infiltrate the privacy of its citizens, deny the people freedom of expression and free press against what is in the Constitution in the name of fighting terror is also a terror.
In Egypt, for the government to take out the Muslim Brotherhood, it resorted to terror, and it killed over 800 defenseless souls for supporting Muslim Brotherhood against the government’s abortion of democracy.
A section of Syrians accused Bashir al–Assad‘s government of terror and decidedly began a freedom fight and upon which they are called freedom fighters visiting terror against the al-Assad’s government, but al-Assad's government has emerged to be a more severe terror. The civilized world wanted to go to Syria with a more  terrifying power against al-Assad’s terror in what would have become a balance of terror, but al-Assad succeeded at postponing the evil day through diplomatic maneuver orchestrated by Russia's Vladimir Putin.
Another terror against terror has just begun in the world’s newest country in South Sudan, where a warring president has declared war against his vice-president, each accusing the other of starting a terror. There is terror in Congo; there is terror in Israel and Palestine, there is terror in Democratic Republic of Congo and there is terror in Nigeria where the Pope says constant attacks don't spare the innocent and defenseless. There is also terror in the Phillipine, where nature has visited with devastation.
Some people describe  the Pope's as Pope of the world because of the tone of his Christmas speech and prayers against for victims of terror. speechIn all these, the common people are the victims of terror, whether terror in the form of  mad men maiming defenseless people or civilized people declaring a war against retarded souls to prove superiority of terror.