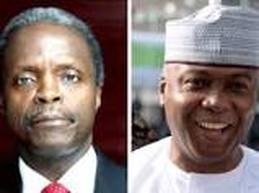 Acting President Yemi Osibajo Senate President Sola Saraki
Some Nigerians find it difficult to differentiate between allegation of corruption and the crime of kidnapping. The argument about the differences between corruption allegation confessed kidnapper began over the weekend following the arrest of a kidnapper, who confessed that he had engaged in kidnapping for 10 years, when he was also elusive to police, before his arrest last week.
The country's senate president, Olusola Saraki also regained his freedom from corruption accusation, for which he had faced trial before a tribunal for one more than one year. The senate president was set free, the same week that the kidnapper was arrested.
Some funny Nigerians think that the senate president should not have been set free for the counts of corruption against him before the tribunal.
​    Therefore, they have said that since the senate president has been set free, the kidnapper too should be set free without trial. Certainly no one one is against the kidnapper being freed, if after during trial he is found to innocent. It is about the rule of law., that all are presumed innocent until convicted by a court of law. 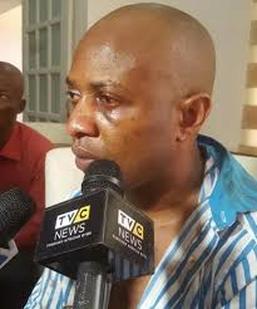 Evans - the confessed kdnapper
But the confusion that the development in Nigeria wants to create is one of jungle justice, because there is high corruption in the country, anyone accused of corruption should be seen as guilty, even after investigation and trial by a court of law says such a person is not guilty.
Nigeria is still a country inhabited by humans and not animals. Although, it is the politics in the country that has roped the senate president in the accusation of corruption, because a mysterious power wants to settle a case with him, for being politically smart to have hijacked the senate presidency the power that says it is right to produce the senate president.
It is this mysterious power that has made nigeria looks like a country inhabited by animals with the dragging of Saraki before a tribunal over corruption charges. Saraki may be corrupt like every other Nigerian politician or big men, but any sensible person would have known that Sarak offense for being before the tribunal is not for corruption, but for being to smart for leaders, who still need to go back to school, to learn about political manipulation.
There can be no place in the world, where political manipulation - using members and numbers to get ahead of opponents - is a crime of corruption. Unless in countries, where the "Animal Kingdom" tendencies have sprouted and germinated. But in Nigeria, observers should begin to wonder, whether the animal tendency has not taken over. 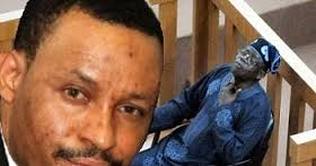 Bola Tinubu and Danladi, while Tinubu faced the same charge like Saraki and was set free for not guilty.
Why? The major corruption agency is reportedly angry with Danladi Umar, the president of the tribunal that set the senate president free, and the agency is said to be readying to take the judge to court for corruption. But why has the agency waited for so long for Danladi's case files, when the case about his acts, rightly or wrongly, has been in the media reports?
This brings about the question of the powers troubling Nigeria and whether all these developments, Saraki's freedom and corruption agency's challenge to Danladi, have connection to President Muhammad Buhari's absence in the country? Who is the mysterious power that wants Saraki punished for becoming a senate president? Is the power currently in the or out of the country? How did Danladi eventually arrived at his senses to set Saraki free?
Yet, despite the lack of answers to these questions about the struggle for power among the ruling party politicians resulting in sending one of themselves before a tribunal for corruption, it should not happen for anyone to demand freedom for a confessed kidnapper without trial and allowing the court to their works.
Although, it is understandable that people calling for freedom for the confessed kidnapper are encouraged to that path for what many people call their loss of confidence in the Nigeria's political system. Yet, losing faith in a political system is not enough justification to turn a society into a jungle.
Already almost turned into a jungle, it should be the work of all Nigerians, to help turn Nigeria back to a decent society, where the rule of law is respected.
​
Comment Form is loading comments...
NEWS AND FEATURES
News & Features Around The World