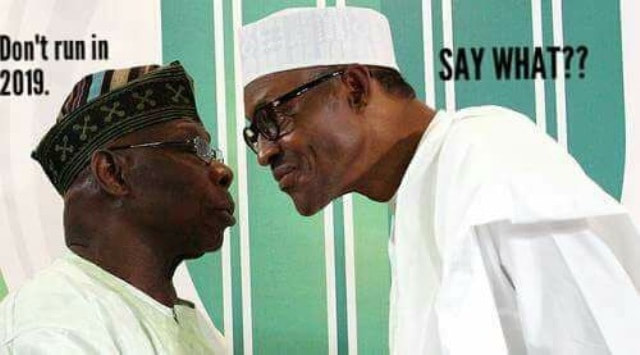 Obasanjo and Buhari
On Tuesday, Nigerian newspapers published a report about Buhari's mention of a waste of about $16b on a lame duck power plant project.
The lame duck power project reliably occurred during Obasanjo’s time in office as a civilian leader.
But Buhari did not mention Obasanjo’s name. However, the media was able to link the lame duck power project to Obasanjo's time in office.
And some Nigerians are saying that Buhari has said some things about alleged corruption against Obasanjo’s time in power.
Obasanjo has fired back with a statement to the media describing Buhari as ignorant, in an effort to set the record straight. And Buhari has re-confirmed his words that Obasanjo lacks defense in the matter of the wastage of the $16b power project.
People are asking why is it now that Buhari is talking about alleged corruption during Obasanjo’s time as a civilian president, and why hasn’t his government apparatus for the fight against corruption go after Obasanjo and make him accountable for his term in office, instead of waiting and allowing the discourse to turn into an electioneering altercation?
Many Nigerians easily proffer an answer to such myriad questions by saying that Obasanjo and other former military leaders are living like emperors, and that despite having presidential power, Buhari is impotent about asking for the source of the questionable wealth of those former military leaders. It is why many Nigerians have described Buhari’s fight against corruption as selective and targeted against seemingly powerless opposition members.
Already, Obasanjo had given Buhari a quit notice asking him not to run for a second term with reasons many Nigerian describe as valid. Obasanjo had also formed an organization that had turned into a political party, aimed at ending Buhari’s presidency. But whether Obasanjo will succeed at ensuring Nigerians truncate Buhari’s presidency will be determined time and events leading to the 2019 elections.
Both Obasanjo and Buhari had fought in the country’s civil war on the side of efforts to keep Nigeria united. As military officers, both had ruled as military head of state after the war. And now they both have returned from the doldrum and have tasted rulership as civilian leaders.
Olusegun Obasanjo ruled as a civilian leader for two terms of four years, and he sought a third term unsuccessfully. Muhammed Buhari became the current civilian president in 2016. He is still experimenting with the complexities associated with civilian rule, unlike the military rule of orders without questions.
Obasanjo did not confront corruption openly, unlike Buhari. Buhari is currently fighting corruption. Just like he as a military head of state. Many Nigerians believe that Buhari ascension as a civilian president would have been impossible without Obasanjo’s turning against his own party, disowned Goodluck Jonathan, the sitting president, favoring Buhari’s opposition.
Still there are many Nigerians who think Obasanjo is playing control politics, wants to un-deservedly be the grandfather of Nigerians politics and wrongly expects whoever is president to do his wishes. Apparently, Obasanjo is up in arms against Buhari, already touring and meeting political leaders about the need to rescue Nigeria from Buhari.
He rescued Nigeria from Jonathan and helped Buhari to power. It is not certain whether Obasanjo will achieve the same feat in efforts to unseat Buhari.
Widget is loading comments...
NEWS AND FEATURES
News & Features Around The World