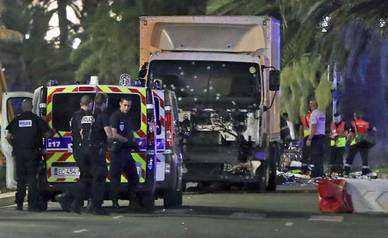 The truck that killed 80 in Nice, France
People are worried and apprehensive about their safety, concerning the turn of events around the world, and the new style currently being employed by terrorists, in their inhuman acts against the society.
The running of a truck in Berlin into the Christams market killing 12 and the earlier running of a truck into innocent people in Paris killing about 80 people, express the paramount of public concern here.
The use of truck by terrorists to kill innocent people is a new measure by terrorists, who probably have no access to guns and bombs, based on the information from Germany, which said that the suspect was once arrested for robbery, where he planned to use the proceeds for acquisition of guns.
And possibly, when guns and bombs cannot found, the resort to a truck became a solution to achieve a murderous aim.  Aside from the new use of trucks, there is also the lone wolf terror attacks and the home grown terror phenomenon.
On December 2 2015, 12 people were killed in San Bernandino, California, United States, by a lone gun man in act of terrorism, as a veritable example of a lone man terrorist who killed without a clear connection to any terrorist organization. A little over one year after San Bernandino, another 12 people were killed at the Christmas Market in Berlin on Monday, December 19, 2016, in yet another act of terrorism. 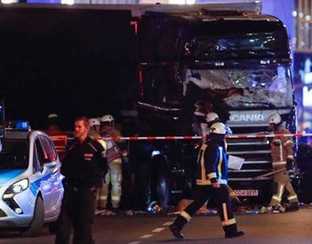 The truck that killed 12 in Berlin
The ISIS claimed credit for the San Bernandino killings, just as they had done for the Berlin's Christmas market killings. Although, there is no known information that the killers had any link with the ISIS.
Just as discussions over the terror killings in Berlin intensified on Wednesday about the identity of the suspect in the killings of 12 innocent people with a truck in Berlin market, there were also news reports about 11 children who were killed, also with a truck that ran into their procession at a village in northern Nigeria. Reports said that the truck that killed the children had brake failure.
The killings of the 11 children in Nigeria by a truck that ran into their procession durring the remembrance of Prophet Muhammed had not gained much traction in current affairs, probably because it had not been linked with terror and the ISIS had not claimed credit for it.
Again, the truck driver in Nigeria was arrested and he was summarily killed by the mob, according to police reports, unlike the situation in Germany, where the real truck driver was reportedly killed with a gun shot and bruises found on his body, showing an attempt to knife him, before he was shot. And the guy, who suspiciously killed the driver before he ran the truck into Christmas shoppers, whose lives he ended and injured many, and went on the run. Did the mob in Nigeria the legal right to kill the truck driver, whose vehicle brake failed? Is killing the driver not another form of terrorism? Isn this type of terrorism - disrespect for the rule of law - not doing Nigeria same evil equivalent to Boko Haram?
The police in Germany are searching for the guy who rammed a truck and killed shoppers. He is described as a Tunisian national and a man with crime records that have raised questions about how Germany has allowed him to continue living in the country, in spite of the fact that the country has denied his asylum application. ​
Now people are getting scared of trucks and that the man behind the truck wheels may be looking for people to kill. Another fear is about going into the mall for shopping. Of course, the truck driver also has his fears about a madman seizing his truck to commit terror. In this case, every legitimate truck driver will have to begin to think about getting arrmed, to fight off any terrorist attack, first  against him and the possibility of seizing the truck to kill mass of people.
The truck, known for ferrying goods and services, a source of income and livelihood for many people, and not known before to be a lethal instrument for evil, is fast asuming a new dimension - as an instrument of mass killings - for  terrorists, in the absence of guns and bombs.
NEWS AND FEATURES
News & Features Around The World