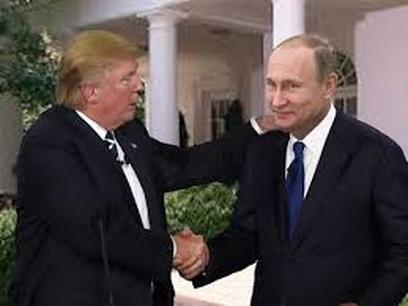 How did the American media allow President Donald Trump out there, shaking hands with President Vladimir Putin of Russia? Hasn't a section of the media been in the front of allegations that Putin meddled in the country's election to help Trump defeat Hillary Clinton?
On Friday, the world is witness to Trump and Putin shaking hands in Germany at the G20 countries meeting in Hamburg. News reports said that Trump challenged Putin over Russia's meddling in the U.S election and the hacking of the Democratic Party, and that Putin said it did not happen.
Before the meeting of the two presidents in Hamburg, there have been no optimism that Trump would be able to ask Putin such a question about Russia's hacking against America and meddling in the elections. But Trump did! Putin's answer may not have been sufficient in itself, but as soon as the question and answer over the hacking and election meddling was over, the two men progressed to other issues in their meeting.
Trump was noticeably harsh in his words against Russia concerning Ukraine and other areas, where Russia is neck deep in diplomatic squabble against the West. If indeed Trump has any help from Putin to defeat Clinton, won't his tough words against Russia be an opportunity for Russia to publicly roast him?
Happily, the U.S. and Russia have been able to move beyond the accusation of election meddling to talk about other issues like the war in Syria and arrived at some agreements toward ending the killing of the innocent people in that country. Observers hope that the two countries will be able to cooperate toward ending North Korea's exuberance and escalation of missile testings.
Despite reports of North Korea's testing of a missile capable of reaching Alaska two day before the Hamburg meeting of Trump and Putin, Trump is still exercising caution about how the U.S. is approaching the North Korea crisis, citing the mistake over Iraq and the non-existence weapons of mass destruction and the senseless war in that country..