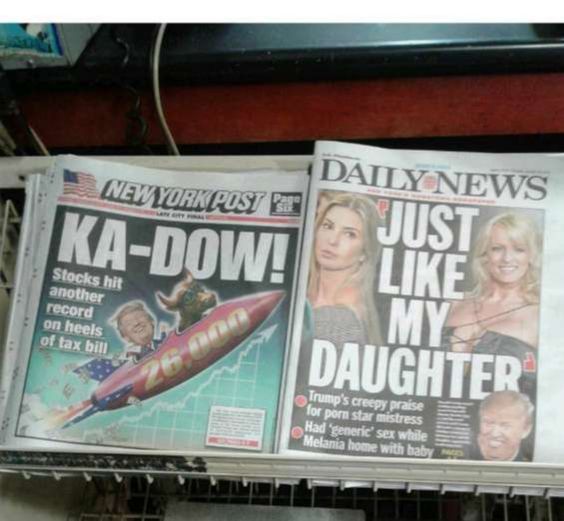 What does President Donald Trump's presidency remind you? Isn't it about uncertainty of human life and about waking up alive after every sleep, when it is actually possible to go to sleep and not wake up?
No one was sure he could win an election, but he did against all odds. He fought his way in the party of his choice, humbled over nine promising presidential candidates and confined the Clinton political dynasty into irrelevance.
As Trump approached his first year anniversary as president of the United States, all that happened during the electioneering and his eventual victory at the polls came to the forth with the Daily News and New York Post New York front page reports on Thursday.
The Daily News report focused on a newly trending news about an alleged affair between the Trump and a former porn star, while the New York Post's report highlighted the unstoppable stride in the economy signified by Dow's continuous triumph since Trump's ascension.
One report could be described as negative and the other as positive, showing two sides of Trump as an imperfect human being.
Just a day to the presidency's one year, the government's shutdown began over inability of law makers to agree on a stop gap provision to forestall the shutdown. Of course, it is not the first time that the U.S. has witnessed government's shutdown at the federal level. But happening under Trump makes it look like it is the first time such shutdown has occurred. It is like the opposition eventually has the means to temporarily stop him.
But Trump's good ride on the economic front has helped cow his adversaries, no matter what the the opposition's aim w shutdown of the government   The Robert Mueller's  investigation into whether Russia helped Trump in winning the election is almost in the limbo with uneasy quietness or calm around the investigation. Yes, Trump has been in office as president for over 365 days and the opposition members seething with vengeance, hoping Trump should have been ousted by now are in confusion.
Equally women celebrities are not happy and they have  turned Trump's one year anniversary into an opportunity for mass protest around the country, with the biggest of the protests in New York, according to news reports. Meanwhile, law makers and politicians in the two major parties are trading blames for the government's shutdown. But we all know the bucks stop on the president's desk
However, the economy, which Trump's adversaries have prophesied its collapse has not collapsed, but doing the opposite and it is what Trump has going for him. It is one goodness about him that has overshadowed all the other evils that a section of the media that is opposed to him has been shouting about on the roof top, and giving the media that is supportive of Trump the room to eulogize him and also go after against his rivals.
This was confirmed in a radio talk program a week ago. It is affirmed in the program that as the CNN and other anti-Trump media talk negative things about Trump, the media that is supportive of Trump has been talking about the wellness in the economy and the renewed investigation into the Clinton's finances.
Just as some people who are die-hard Trump adversaries among the celebrities have not stopped talking about Trump's presidential style as unconventional, so are die-hard Trump admirers say that many of the celebrities would have vowed to migrate from America with the Trump's victory at the polls are yet to fulfill their vows, and therefore have no right to criticize the president for his unconventional stances.
Well, it is believed that not all children who may have been prophesied to die in childhood actually die, and some of such children live to fulfill their destinies. The same is being said about the Trump phenomenon, seen as soon to disappear from the scene, but has lived beyond expectations.