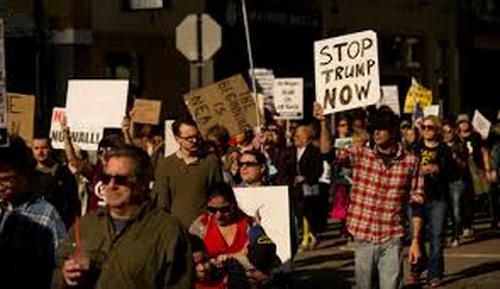 Some protesters in demonstration aimed at stopping Donald Trump (Courtesy: oopsreviews.com)
The number of apprehended illegal immigrants at the United States' Southern border with Mexico has fallen considerably, news reports say.
Discussions among observers about President Donald Trump's enforcement of immigration law as likely cause of positive news has not abated, when the February job number exacerbates the debate.
Is Trump's performance the result of the fall in illegal immigrants arrested at the border, and is he to take credit for the 235,000 job number in February? His apologists say he is. While his adversaries say he is not. And some are not very sure.
Observers are already saying that what Trump needs to turn up his favorability among the electorate is good performance. And that the beginning of the battle between him and his adversaries has begun to tick upward in his favor, with the news about the fall in the number of illegal immigrants, which most people say is caused by government's decision to enforce the immigration law. The same is applicable to the way he is being viewed concerning the February job number
The New York Times report says the answer is ambiguous, whether or not Trump should be given credit for the encouraging job number. The Times report says that there is a straight forward case for President Trump's having virtually nothing to do with the most recent economic statistics. And that at the same time, some positive Trump effects on the economy cannot be ruled out.
A proverb in Nigeria among the Yoruba people says, "It is your work that will prove whether you are lazy." If a man is adjudged lazy by words of the mouth of his adversaries, it is what he is found to actually represent in his work output that will exonerate him from unfounded malice.
Some people have said that it is to stall his performance that some of his adversaries have decided not to give him any chance to settle down to work, but instead use protests, demonstrations and negative media reports, to distract his attention to make him lose focus. This trend has been witnessed in the mammoth opposition that greeted the administration's rolling out of first attempt at a travel ban of some categories of immigrants. But he is undaunted, as he has rolled a second travel ban, trying to get back on his feet from the floor, where he has been forced into by legal fights over the travel ban.
Some curious observers have also said that the constant leaks against his administration by yet unknown people, which some people have said may be the handiwork of remnants of President Barack Obama's appointed officers without confirmation, is also believed may have caused the latest request for 46 attorney generals appointed by President Obama to tender their resignations. The trend shows a struggle for freedom from damaging leaks to get to work.
There have been reports of possibility of litigation over the administration's second attempt at a travel ban. And in the middle of the entanglement, the government is manifestly working hard to carry out what it calls necessary surgery work in the country's health care program. Reports by the media have shown how hard Trump and his team are working to get the Congress to give a passage to the new American Health Care program.
Amid arguments among his own Republican Party about lack of satisfactory provisions in the new health legislation said to enjoy Trump's approval, people have said that if the program succeeds or fails, Trump will be responsible, since it is said that the bulks stop on the president's table.
Now, the scenario shows that Trump said he would enforce immigration law and reports have shown that the number of illegal immigrants apprehended on the border with Mexico has begun to plummet. The job number also raises the possibility that if the number continues to remain favorable, Trump's adversaries would have little to say to convince the public against him. Moreso, if he gets the health program right.
The picture should be clear to the discerning: if Trump is able to use his performance to turn the table against adversaries, he will be like an elephant with tap roots of trees clogging his path to the water, and the will have to follow the elephant to the river against their wish.
NEWS AND FEATURES
News & Features Around The World