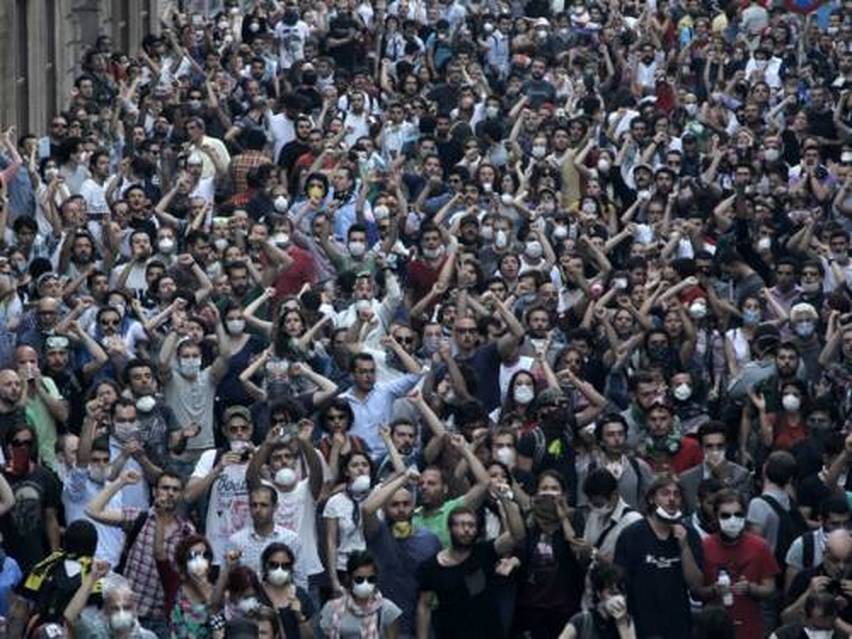 Turkish Protesters (Courtesy: sbs.com.au)
The people want an untainted environment, but the prime minister- Recep Tayyip Erdogan of Turkey - thinks otherwise, and he is pushing to have his way against the people. He has vowed to continue with construction work at Gezi Square in Istanbul, the real cause of protests and demonstrations by aggrieved Turks who feel that the prime minister is stubborn and undemocratic.
These aggrieved Turks have taken over the Square and have vowed not to leave. Erdogan had called them names such as looters and                  . The people in turn have described the prime minister as proud, arrogant, selfish and stubborn. And almost in allusion to the peoples' description of him, he said from where has led that he does not support or approve government by give and take. He said his party has been elected thrice and does not expect the minority to tyrannize the majority.
Consequently, a protest  that began over a square in Istanbul had almost turned into a national issue, protesters having attracted sympathy across the country, following police brutal shooting of tear gas  against them. Erdogan's deputy, Bullent Arince, apologized for the police brutality. But Erdogan is acting like an Emperor doing everything to stall for the peoples' victory.
From abroad, Erdogan retracted a little bit from his tough stance. He said the defenders of the park were true in their call for a green environment, but added that certain terror groups he identified as Marxist-Leninist (without naming names) masterminded or hijacked the protest. On arrival at the airport from his travel, he was welcomed by his supporters who sought to go and antagonize the park occupiers, but asked his supporters to go home; addressed the issue of having won just 50 percent of the votes to win his last election - a challenge the protesters have thrown at him for talking about the minority tyrannizing the majority - and said he had served the whole 76 million from the West to the East.
The protest has cooled down temporarily with some of the people permanently at the square. Possibly, if Erdogan decides to press ahead with the construction around the park, he may be seeking to end his own time of service to the people of Turkey, because he will be asking for further trouble that will be capable of swallowing him.
NEWS AND FEATURES
News & Features Around The World