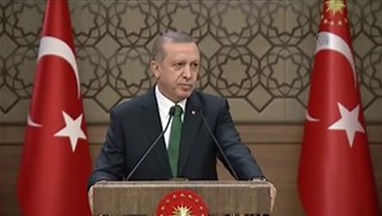 President Tayyip Erdogan of Turkey
The number of the dead from the Turkey's Istanbul Airport terror attack has risen to 44. The number climbed to 42 on Wednesday. By Thursday afternoon, it has reached 44.
Following the attack on Tuesday, the number of the dead was estimated to be 28. Although, some reports said it was 31 and others said it was 38. Another report said that doctors in the hospital attending to the wounded said that the number of the dead may rise to 50.
The latest number of the dead proves that the numbers of the dead have been on the increase, just as it is always the case, whenever terror strikes. It is very rare that terror strikes without loss of lives. And the terrorists are not letting down their determination to take lives. They have struck in Paris, Brussels, Boston, San Bernardino and Orlando.
Following the attack on Istanbul, President Tayyip Erdogan of Turkey made a statement that represents a wake up call to world leaders concerning terror and the continued killing of innocent people. Below is Erdogan's statement published in some newspapers.
“The bombs that went off in Istanbul today could have gone off in any city in the world, in any airport. I want everyone to understand that, to the terrorists, there is no difference between Istanbul and London, Ankara and Berlin, Izmir and Chicago. Unless we come together as all countries and as all people, and fight against the terrorists together, all possibilities that we can’t even dare think of right now will come true.”
What Erdogan statement suggests is that world leaders are not doing enough to address the issue of terror attacks on innocent people in several cities across the world. Another import from the speech that needs our attention is that the statement seems to mean that it is only in Turkey that terror attack has taken place. By saying that there is no difference between Istanbul and London, Ankara or Berlin, Izmir and Chicago, Erdogan is saying that the terrorists have no respect of place or people.
Erdogan may not be far from the truth. But the question his statement attracts is that who are these terrorists and what is the grievance and what part of the world are they domiciled and import their terror ideology to other parts of the world? Has not it become obvious that one major problem in the war against terror is the fear to say the truth and effort to avoid annoying followers of a certain religion that terrorists claim to belong to its radical ideology arm?
Is there no need for world leaders to meet and address the issue of terror, the terrorists, their grievances and what to do to resolve the senseless blood letting by terrorists around the world? Since many people say that it is not acceptable for Donald Trump, the United States presidential candidate, to suggest banning anyone temporarily from entering the US, while leaders of Arab countries and representatives of the U.S meet to discuss what is happening toward tackling terror, is not it appropriate for these leaders to meet for a vigorous discussion of the beginning of terror, the cause and what can be done to resolve the disagreement and senseless killings?