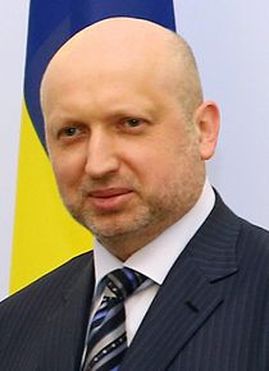 Yatsenyuk
The Ukraine's Revolution has run into a logjam, and Kiev's territory is being sliced like a piece of cake. Crimea is long gone. Donetsk and Luhansk are about to follow. ﻿The only response from Kiev is that Eastern Ukraine is heading into the abyss.﻿
Vladimir Putin has told the Russian speaking separatists to put a referendum on hold, but the people say Putin has only advised and he has not commanded. They are holding the referendum today and about to make Ukraine a piece of cake.
Just a couple of months ago, there were celebrations on Kiev's Streets and across other parts of Ukraine with the world applauding the protagonists in what was called Ukraine's revolution.
But today the celebration has turned into worries as Russian speaking population in the east of Ukraine are bent on having their own share of freedom from Ukraine's power holders.
Now a large number of people in the east of Ukraine are careless whether they are heading to the abyss or heading to Russia. The first concern to them is to get away from Ukraine.
One reason observers say Kiev has said the East Ukraine is heading to eh abyss is the separatists inclination to hold the referendum inspire of Putin's asking them to wait. Kiev believes that if the separatists will call the bluff of Putin or Russia that has been their backbone, the wish to hold a referendum to be independent of Ukraine and Russia at same time will a a repercussion.
But there is a speculation that the separatists announcing a wish to be independent from Ukraine and Russia is a ploy, and that after the referendum may have passed and given them the freedom to determine their future, they may be going the way of Crimea. There is every reason to follow the syllogism here that Russia is waiting for the East Ukraine to follow Crimea.
Just a few days ago, Putin announced to the world he had ordered his Russian soldiers to vacate Ukraine's border. But NATO has said the Russian soldiers remain in Ukraine borders.
NEWS AND FEATURES
News & Features Around The World