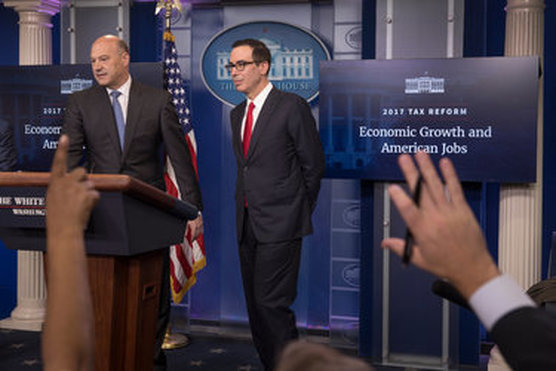 Mnuchin and Cohn at the briefing on Wednesday
Plan for tax cuts in the Unites States was announced on Wednesday by Steven Mnuchin, Secretary of Treasury and Gary Cohn, President Donald Trump's senior economic adviser.
According to the announcement, the plans to cut taxes for individual Americans and corporations is based on the need for economic growth and jobs. The plan will double the standard deduction for individuals and cuts corporate tax to one time 15 percent.
Although, the tax cuts have not been formally approved by the Congress, Mnuchin and Cohn said that the announcement was to assure Americans that they had been having discussions with Congress on the way forward toward the fulfillment of Trump's tax cuts promise.
Cohn said he knows it is not easy to do great things and that there will be criticisms from the right and left, but he knows the president is determined to push this through.
Currently, standard deduction for individuals is is between 6200 and 12,000, depending on whether one is filing single or married. If the Congress approves the tax cut being sought by the White House, the deduction will be doubled. And that will not be all, this will be after each tax payer has taken away or be allowed to enjoy tax free of his or her first $24,000.00 income.
The tax code will be changed for corporations to make one time tax of 15 percent. Analysts describe the tax cut for corporations as massive for business and capable of lifting the anemic growth rate from its current 2 percent to between 3 and 4 percent. If achieved, analysts say that it is capable of ensuring economic growth that will ensure that kids will be certain of college and the real estate business gets a bump.
However, like all government programs, the tax cut is being subjected to debates, which already show that the Democrats are asking for assurance that the tax cuts will not favor just the rich. Another unconfirmed report says that a section of the Republican party in Congress has not fully approved the tax cut.
For example, Chuck Schumer, the senate minority leader, said that he expects the program to be made available for the Congress members to study and that he hopes it is not tailored to benefit just the rich like the president. But no matter what the politicians say, Americans expect that tax cuts will be a great lift from the burden of the amount of tax they pay that goes to Uncle Sam from their checks, aside from helping families with child-care cost.
"It is tax cuts for economic growth and jobs," both Mnuchin and Cohn said, in answers to reporters' questions, about who will benefit from the tax cuts. As the 100 days in office for Trump nears, it is obvious the government is making efforts to push through with most of the major campaign promises made by Trump before the 100 days anniversary.
There are already echoes of "Where is the money or Bring the money" from many Americans across the country, who say it is rare for Uncle Same to be this generous, to want to give back to Americans.
NEWS AND FEATURES
News & Features Around The World