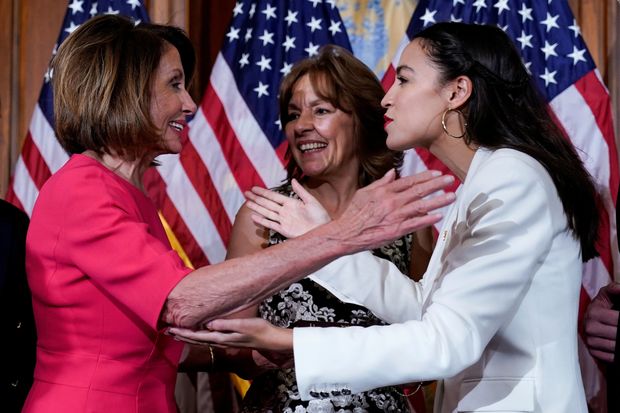 Nancy Pelosi and Alexander Ocasio-Cortez and another Democrat in fence mending session over differences on the way forward (Courtesy: The Wall Street Journal)
United States is not Sodom and Gomorrah, but some people think erroneously think it is. Why? They say America as a free country allows all sorts of lifestyles, and some of these resemble what they have read in the holy book about Sodom.
A recall to the story of Lot, Abraham's nephew in Sodom, how some Sodomites sought to sleep with angelic visitors, despite Lot's pleas for them to have one of his daughters than incomprehensible wish to sexually defy angels!
"This is Sodom and Gomorrah,"  a passerby witnesses a woman exclaim on Linden Boulevard and Bedford Avenue in Brooklyn, sometime ago. The passerby watches the woman with awe, thinks she is right, but thinks to whom is she complaining, and isn't she aware that the U.S. is built on freedom and the rule of law?
The woman may not be wrong just as she is equally not right about her viewing the country as Sodom, because the country in reality is not Sodom, even though it seems to be so in practice, because of experiences that recall Sodom's culture. Some men drugging women to sleep with them. And men of God sexually defying parishioners, not just women and men too! Yet, the law in the country frowns against these acts.
Just like the woman in Brooklyn is ignorant of the essentials of the American freedom and the rule of law, so are some politicians in the country seem to be ignorant of what the country represents in the economic world. Or they are aware but they are agitating for socialism as if Socialism has been successful here at sometime that no one knows before its displacement by Capitalism, and these politicians want the restoration of Socialism as a veritable vehicle for economic success that is lacking.
Some curious observers are saying these politicians don't seem capable of analysis of the politics and economics of their country, and that if they do they would not be making agitation for Socialism as the bedrock of their plans to win an election. They are ignorant of the fact that the country is the capital of the Capitalist world. They are bent on provoking a revolution no one wants but themselves and their cronies alone.
Recent election in Nigeria that fielded about 80 presidential candidates mostly young candidates who thought they had the means to convince the electorate to vote against old politicians was a good experiment about politicians who are incapable of analysis of the politics and economy of their country, and why they lost woefully to the old and corrupt system they wanted to change. Why run when aware you cannot even win votes to convince people you are a serious contender?
In the world of serious business investment, you don't invest money to win little or lose all. You invest to win big, if not for the first time, you at least must show the ingenuity that losing the first time does not mean an end, but a beginning of a big success in the future. When you have lost an election, it is compelling you sit down and analyze causes of the loss.
There is a need for frankness and prudence and not just embark on blowing hot and showing toughness that is not really toughness but characteristic of an empty drum that makes so much noise. You must arrive at fine-tuning of policies that would make the voters consider your party against the winning party.  A research methodology to help in giving you the knowledge of what the voters need or their preferences is also necessary.
As matter stands today in the U.S., Socialism is not what voters need. Many Americans are satisfied with their Capitalism. It is Capitalism that has drawn many immigrants here, because they believe in working hard and reaping the fruits of their labor, and not anyone taking what they have to give to another. Russia is home to Socialism and not many immigrants are heading to Russia, because they don't like what they see in Russia. Not even Socialism in Venezuela or Cuba or any country has been able to convince people here that Capitalism can be ditched in favor of Socialism.
So, where do these politicians craving Socialism derive their ideas that campaigning to entrench Socialism against Capitalism can be a game changer? Many of the Democratic Party presidential candidates have not demonstrated a good knowledge of the past history of the country's politics the way they all run behind the NEW DEAL, a deal that is not new anyway but a repeat of history. Where are the Communist ideas of yesterday? Are they still alive? Why do the Democrats think and view Socialism as a solution?
HTML Comment Box is loading comments...
NEWS AND FEATURES
News & Features Around The World