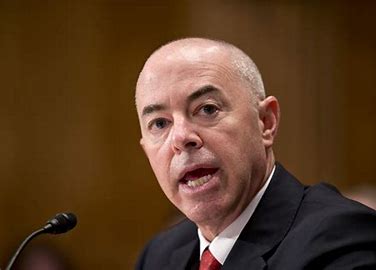 Alejandro Mayorkas
Alejandro Mayorkas, the United States secretary of Homeland Security, is facing impeachment possibilities if the House indicts him. It is the cross he carries for the sharp increase in illegal immigration since his assumption of office.
The situation at the border places Mayorkas in the eyes of a political storm. Any news reports about the border condition worsen the Mayorkas' position. Therefore, people wonder if Mayorkas can still manage a sound sleep anytime.
His bosses in the White House expected him to be a miracle worker, to manage a crisis caused by an open border policy. The Liberal media's compromise confounds Mayorkas's problem. Mayorkas dances to the tune of the media that do not call the porous border a crisis. A large section of the media does not see anything wrong with evil. If this section of the media had taken the border crisis seriously, Vice President Kamala Harris would be held accountable for the crossing mess for leaving a job his principal assigned to her undone.
The secretary is a victim because he falls in toe with the shameful song about an open border. He cannot oppose his bosses or advise against an open crossing. He belongs to the party in power and swims along with the tide. His party controlled the White House and Congress. The word they uttered was law, even if not passed by the House. Mayorkas may have mistaken his responsibilities are not to President Joe Biden but to the people, and that he will go away unaccountable for his role as the Homeland secretary.
And so Mayorkas went with the tide, filled with power and authority. He was in charge when a border patrol officer allegedly whipped an illegal immigrant in the process of control. But whatever happened that day between the officer and the immigrant turned into a controversy, and uncertain if the officer committed the offense. But already, the power had pronounced him guilty and vowed a punishment. The poor officer got a swift suspension.
It was a case of Mayorkas and his bosses versus an unknown officer whose crime imagined crime was doing his work. Curious observers believe the affected officer may have gone on his kneels seeking God's intervention. He must have prayed harder during the midterm election for the party in power to lose because his situation would remain the same without the party losing the election. He must also have prayed harder when it seemed the Republican Party, which observers expected to score a landslide victory, did not pick steam enough.
He must have thanked God when the power that had besieged him lost the midterm election, though, with a slim margin. It means a change of control in the House that could transform his misfortune into a fortune. He will be near the celebration, hearing the House invited Maryokas, seeking clarification on the situation at the border. But, like other Americans, he must watch in unbelief Mayorkas' statement that the boundary was safe, and some members said he had lied with a vow to hold him accountable if they had the power. Mayorkas will account for his statement.
When a person is appointed to serve, it is service to the country and not the power that establishes. Mayorkas is supposed to manage, report the situation to the White House, and ask for a solution. Mayorkas will set an excellent example if he resigns to protest the unpalatable situation caused by the administration's open border policy. The fact that he was satisfied with the crisis at the border the way the White House and the Liberal media wanted it made him the scapegoat.
If Mayorkas had not told the House the border was safe, he would not face an impeachment threat. All the House wanted from him were facts about the border situation. He failed when he said the border was safe. He was marked to be punished for misinformation, to teach others a lesson in leadership and accountability.