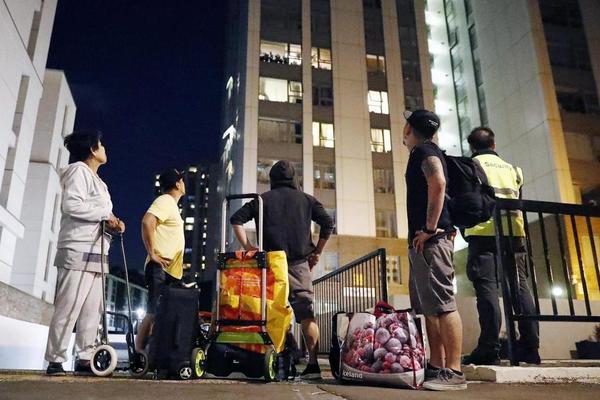 They look up the floors up there with safety in their minds (Courtesy: Evening Standard)
Residents evacuated from their homes in Chalcots Estate in north London, following Grenfell Tower fire, have refused orders from the estate owners to return home.
The residents cite lack of assurance for safety, as the cause of their fear and reason not to return home, as ordered by the estate managers.
Consequently,  the Camden Council, managers of  the estate said that the protesting residents hotel accommodation payment, began when they were forced out of their home, aftermath the Grenfell Tower fire, threatened to stop payment for hotel accommodation, the Evening Standard  reported.
The residents were reportedly moved out of their homes on June 23, following the buildings failure of inspections. The estate managers said on their website that the estate is now safe for accommodation and residents should return home. But 100 out of 641 of the residents are asking the estate managers to put the assurance of safety being given to them  in writing, detailing inspections and the outcome.
​     Although, the estate managers said the premises is now safe, they also show a need  for residents to begin paying their rent again. But the protesting residents want to be assured of unquestionable safety, before the rent money will begin to roll in again.
The Camden Council represented by Georgia Gould said that the council has executed urgently required works for residents of the Chalcots Estate to return home, with assurance that the council will go over the works to assure residents of safety, and that for now  the London Fire Brigade have informed the council they are satisfied of enough progress toward safety and residents can begin to return home.
But the residents want all these information communicated to them, and not just as stated on the council's website. However, 564 of the 641 residents are reported to have returned home. Residents who have not returned have hired a lawyer to help press home their case and concern for safety above all other things.
NEWS AND FEATURES
News & Features Around The World