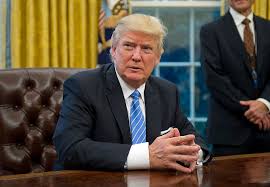 President Donald Trump
People from Iran, Iraq, Syria, Yemen, Somalia, Sudan and Libya have been banned from the United States temporarily, under various categories of migration restriction.
The announcement of the ban was made on Friday, following an order from the office of President Donald Trump, and the order took immediate effect.
Refugees from Syria have been barred from entry the United States until further notice, while 120 days ban has been placed on Refugees entry into the U.S. from around the world.
In the same vein, people from Iran and Iraq are not to be issued visas for three months. A religious test for Refugees from Muslim nations has also been introduced.
News reports said that the restrictions are parts of the vetting scheme to keep radical Islamic terrorists away from the U.S.
There have been reports of people arriving in the U.S. on Friday disallowed from entry as a result of the immediate effect of the ban order. Some passengers from the affected countries were reported to have learnt of the order either at the airport checking in for their flights and others on arrival at the destinations in the U.S.
Various people and groups  have expressed opposition to the order, said to be targeted at Muslims, especially its tone that says migration of more Christian Refugees into the country will be encouraged in comparison to the Muslim Refugees.
NEWS AND FEATURES
News & Features Around The World