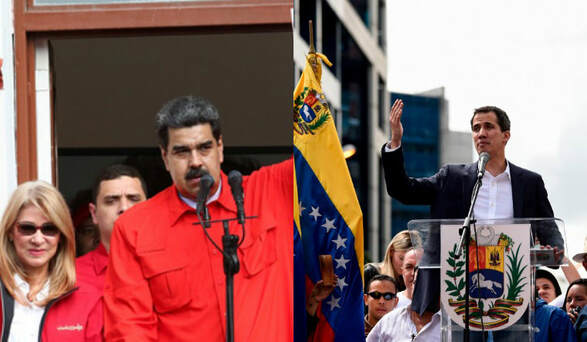 Nicolas Maduro and Juan Guiado
Nicolas Maduro is acting like a normal human being scared of a negative change after a spell - seemingly as a  popular president, following a time after Hugo Chavez.
But how has Maduro mismanaged Venezuela to suddenly find himself riding on a Tiger's back as he is currently doing?
Maduro will undoubtedly be having his own quiet moments outside the rancorous situation he has been witnessing on Venezuela's streets, when he can visualize how he has traveled to be where he is today amid crisis and the possibility of becoming a former leader without respect starring him on the face..
How? Will he get an answer to such a question? And if he does, of what use will it be now that his people have departed him and he is now relying  on the military, according to news reports, to protect him and his office? Why has not he do something all along to tend to the country's economy that is currently in jeopardy? How long does he think the military will protect and assure him of remaining as Venezuela's leader?
Worse for Maduro is the recognition that the opposition leader, Juan Guaido, has been receiving from foreign countries - further jeopardizing Maduro's position. The worst is that before the foreign countries began recognizing Guaido, the Venezuelans' political and economic situation have deepened beyond redemption with consequent reports in the media showing Venezuelans eating from a garbage truck.
When crisis in a person's life has reached a point that Maduro's crisis has reached, friends that are still hanging around should be a ray of hope and reliance. Thus the natural question at this point of Maduro's escapade is about what his friends may be telling him. There is Russia's Vladimir Putin. What is Putin telling Maduro about the crisis in Venezuela?
When crisis assayed Syria's Bashar-al-Assad, Assad not only relied on the Syrian military, Putin was there for him as a loyal  friend. And Putin has remained with Assad through the worst of times anyone would have expected Putin to abandon Assad. Unlike the West that abandons their friend's in trouble times talking about human rights, Putin doesn't.
The world saw the crisis in Sudan in the days of Jaffafar al- Nimeiri and how the United States as a friend of Nimeiri reliably told Nimeiri to visit the U.S. and the moment Nimeiri was airborne, the military that he relied upon sacked him. Observers said then that it was the best way the U.S. decided to resolve the crisis around Nimeiri - considered America's friend at that time.
Many observers who are saying Maduro has only the military behind him may have made a mistake. Observers probably have forgotten about the likely role that Maduro's friends may be playing in Venezuela's crisis, just like some other countries that have recognized Guiado are doing.
Therefore, curious observers are saying Venezuelans need prayers that the country does not become like Syria in the American hemisphere. They say Guaido has been recognized as an interim president by more than a double dozen countries. And that Maduro is refusing to surrender power..
Maduro has reportedly disallowed humanitarian aids to reach Venezuelans. He has been shown in media reports marching with the military. Can one rule out the possibility of a long drawn crisis in Venezuela given Maduro's loss of integrity and his insistence to hold to power?
Comment Box is loading comments...
NEWS AND FEATURES
News & Features Around The World