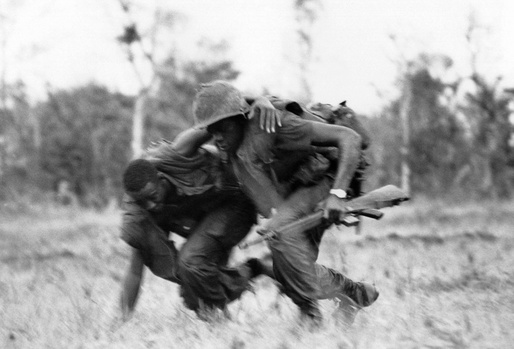 Soldiers from Vietnam war archive
I am a great grand father and 67. I have much to cheer that I am alive. When I talk not many people understand what I am talking. It is great to be alive after dropping off a plane in Vietnam and spent 13 weeks in a jungle with only radio contact. My friends died and I put them in body bags. Here I am still alive and talking.
I was 18. I was drafted against my wish and only son of my father, a world war 2 veteran. I did not sign up. I fought  in the jungle and survived.
James refused to reveal his full identity. Though the reporter succeeded obtaining his phone number for a future interview, but the veteran said he could not reveal more than his joy for being alive, because he is under oath with his doctors not to talk to the press.
"I am on medication. I cannot to talk to the press. My doctors will not allow me to do it. I am just happy for being alive. My friends died and I put them in the bag home."
He was worried that the reporter was merely listening to him, and that the reporter did not seem to understand what it meant to go to Vietnam, returned home and still alive at 67. He said today is his birthday, 67th birthday. He wanted to know whether the reporter knew about Vietnam and the evil it connoted to humanity. The reporter told him to continue with his revelation. He said the reporter was showing enough interest and wondered the reporter appreciated what it meant to be alive at 67.
He has a goatee beard that is all almost white. He is tall and has a protruding stomach. When he disembarked at 42 Street from the A Train the reporter traveled from the Park Avenue station in New York, he said he had forgotten he needed to get off at 34 Street station, and needed to travel back one station to his destination.
Vietnam war was fought between 1955 and 1975. Wikipedia estimated that about 800,000 to 3.1 million Vietnamese service members and civilians were killed with 58,220 American soldiers died in the war. It is why one will appreciate anyone who is still alive after fighting on the American side in Vietnam and celebrating a birthday.
The reporter wishes James a happy birthday.
NEWS AND FEATURES
News & Features Around The World