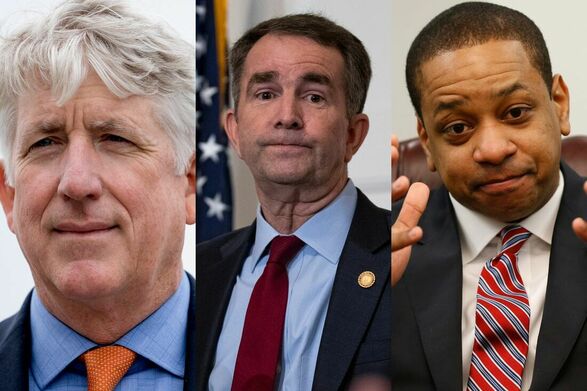 Mark Herring - attorney general, Ralph Northam - governor and Justin Fairfax - lieutenant governor
Justin Fairfax, the lieutenant-governor in Virginia may either have resigned or still struggling against his accusers by the time you read this. Majority members of the Democratic Party have called on him to step down amid rape accusations and his own plea of innocence.
Calls for Fairfax to resign is now louder than the calls for Governor Ralph Northam's resignation. What led to Fairfax rape accusations began with the state governor's wearing of black face in a photograph during his college days and the public demand for the governor's resignation left the door open for Fairfax's elevation.
Notably, the governor's problem emerged after he announced his approval of abortion for babies in trimester of life. It is all about trouble of fair sex and unfair sex, and whether a woman should be allowed to kill a baby from fair or unfair sexual interactions. Sexual interactions between the male and female dates back to the beginning of creation with Adam and Eve in the garden of Eden. It was at the time that the trouble over fair and unfair sex transactions began.
Eve reportedly gave Adam the fruit and Adam reportedly accepted the fruit without questions against rules set by the creator. The eating of the fruit, the good book says open the eyes of the man and the woman. They also knew they had contravened a rule and they decidedly hid themselves from the lawmaker.
"The woman gave me to eat," when the lawmaker inquired from Adam about what he had done. And there the trouble for the eating of the fruit became manifest with a curse that had remained with humanity up to this moment. Manifestly, the world's population has exploded through sexual interactions, enabling increased production on the land with vast political, social and economic activities. And people have admitted the sweetness in sexual interactions and the reason people marry and raise families.
But many people are silently biting their fingers and regretting the trouble from sexual interactions. Not just by those accused of rape or women who have to kill children they don't want after having sweet sex. And what about millions reeling under the weight of bringing up children the hardest way because of lack of resources or children born and have to struggle to make something out of nothing?
Humans continue to partake in fair and unfair sex. Fair sex, based on modern day terminology is consensual, while the unfair sex is when a man forces the woman into the act and it is termed rape! Sociologically, the definition of rape varies from community to community. What is rape in one community is not rape in another community. The definition seems to be based on levels of social development. Countries that are highly developed view unfair sex as criminal, while less developed countries still struggle between criminalizing of unfair sex and just leaving unfair sex to be part of the enjoyment. Though, they term rape as against the law, but those who contravene the law are hardly punished.
Even in developed countries, victims of rape rarely show face because of the stigma and the long investigation before confirming whether the accuser is right or wrong. More so when there have been cases of accusations sprung for political reasons without justification.
Some observers are quietly linking the trouble in Virginia to the governor's approval of abortion for babies in trimester of life. They are saying that without the governor's trimester abortion issue, there probably would have been no picture about a black face ever surfacing.
And the two women who accused  Fairfax for alleged past encounters may have thought it heretic for the man they claim they know based on what they say he did to them and their decision to come out with what they call their experiences with him.
These observers think the Democrats should learn their lesson about the danger inherent in the approval of killing babies for whatever reason or encouraging abortion. Others say the Democratic party all never learn or believe the abortion issue has anything to do with the Virginia's sinfulness.
This raises a question whether anyone should actually approve killing of anyone especially babies with the knowledge about Cain's experience after his slain of Abel and the lawmaker's pronouncement that whoever kills another shall become a vagabond and that such would eventually be killed for killing another.
Why is it that the sexual trouble is stronger in sinfulness than other sins?  Look at the way people work like jerks with little or no return. Isn't the sexual sin responsible for the impossibility of workable economy in the world to alleviate economic problems that people are working and working and the woman having children in pain?
Reports say that Fairfax faces the possibility of impeachment, showing the power of sexual misconduct - proved or unproved. But if Virginia lawmakers have the guts to impeach lieutenant-governor, why would the same lawmakers not impeach the governor and the attorney general for their sinfulness?
Comment Box is loading comments...
NEWS AND FEATURES
News & Features Around The World