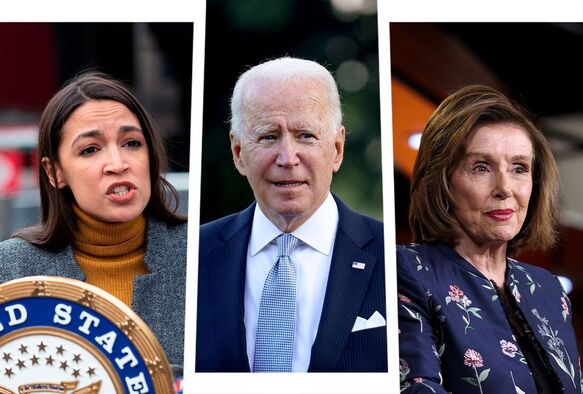 Alexandra Ocasio, President Joseph Biden, and Nancy Pelosi
Every government has a program of intention. The plan, whatever it is,  must address the needs of voters. There must be no confusing the needs of the people with unnecessary antagonism of political opponents, which does not serve the people. Perhaps, it is the reason for the existence of a public policy process enabling the people's representatives to ensure no politically motivated issues gain attention as issues toward becoming an agenda for enrolment into policy.
First, individual members of Congress know what constitutes a problem needing attention in their various constituencies. When introduced in Congress, verification of such issues is unavoidable before being given attention worthy of consideration.
Other national problems that are already in the news are not hidden from Congress apart from ones introduced by individual members of Congress.  The latter issue is easily pushed into a schedule to become a policy because of widespread knowledge about them. Elected representatives cannot expect reelection when they deliberately disregard a national problem from getting desirable attention for a solution.
A good example is the health crisis caused by COVID-19. It was in the news, and the American Congress could not say they were ignorant of its existence. The government and lawmakers were aware of Covid-19; it quickly got a plan to save American lives. One major problem is the current crime wave and the unwarranted killings around the country politicians disagree.
Many politicians in Congress believe in defunding the police. But others have said such a thought is against the safety and security of Americans.  The people would resolve that problem with their votes when they vote in the Congressional election in 2022. Another major issue in the open is the border policy of the current administration. Americans are astounded about how people from around the world are crossing without government oversight.  But the government does consider the open border and crossing of people an issue.  Despite the fact, the COVID-19 Delta variant has seemingly made unregulated entry a reckless decision capable of endangering people's lives.
President Joseph Biden's administration has suddenly forgotten the story of the death of old adults in nursing homes in New York City. It was the beginning of the trouble for Governor Andrew Cuomo, once a Democratic Party hero turned villain. His party circumventing the real policy issue about the death of older people and pushes a personal matter to drown their own man. Biden's administration does not seem to believe it would also be accountable if the Covid-19 Delta variant assails the country while operating an unregulated border without health checks or desirable oversight for those coming into the country from around the world.
The government believes it can compel Americans to wear masks and take the vaccine. The government has also said Americans who have taken the vaccine twice should not think they don't need protection, which the cover against Delta can offer. It is a good radiance that the government is pursuing to protect the people. But what about those who come from abroad reliable without health checks, crammed into makeshift camps, and then released into the country without desirable oversight? Isn't there a conflict between the government's push for protection against COVID-19 and allowing people into the country without supervision in an era of COVID-19 emergency?
These are some questions that the government politicians still in the mood of an election victory don't seem to want to hear. Biden came into office with a sense of purpose of responding to the people. But unfortunately, that responsiveness has given way to satisfying political administration that is now behaving like the reason for his election is to help the political needs of his party. That responsiveness to the people's needs has turned into a mirage.