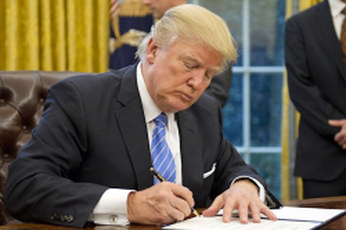 President Donald Trump
"The Democrats have nothing to run on", the White House press secretary, Sarah Sanders, interjected on Wednesday, an answer to a reporter's question, about the intense pressure and the storms around President Donald Trump.
Sander's statement was an encore of what seems to have become the Republican Party's refrain to the Democratic Party's song about the possibility of the latter's hope to regain majority seats in the Congress in November, if the election swings in their favor.
When the Republicans are saying that the Democrats have nothing to run on with which to convince Americans to vote for the party in the midterm election, the Democrats will remind listeners about the alleged Russian interference on the 2016 election and the ongoing investigation by Robert Mueller.
Many Democrats, if not the majority of them, believe that the argument that the 2016 election was influenced by the Russians in favor of the incumbent president and Robert Mueller's investigation and the outcome will give them the anticipated victory in the polls.
Some analysts among the Republicans seem to agree with the Democrats expressing fears that if Mueller's investigation is not completed before the midterm, the continued negative information from the investigation may influence the election against the Republicans.
Many observers think that concerned Republicans may be right.
These observers remind people about how the James Comey's FBI drama also affected Hillary Clinton's chances in the 2016 election. Of course, the Democrats hardly remember the effect of Comey's drama, when they use the Russian collusion as the reason for losing the election. Or they choose to close their eyes and mind to the truth of how Clinton's baggage contributed to her loss in the election.
But unlike Clinton's experience of seemingly self-inflicted loss, the investigation into the collusion is yet to link Trump to the collusion. And as the matter stands, it does not seen Mueller has laid his hands on anything with which he can indict Trump and his campaign. It is why, believably, that he has gone using issues unconnected to the collusion, to hound Trump's associates. Crime is a crime as long there are letters in the statute that shows that a crime has been committed. And this development has widened the storm around Trump with Cohen's attempt to drag Trump into trouble. Observers see Cohen' s guilty plea deal with Mueller to reduce the enormity of punishment of his own crimes as a way Mueller wants to use to get Trump and the area Mueller probably wants a sit-down interview with Trump. But Trump and his lawyers have rejected any idea about a sit down interview with Mueller.
Undoubtedly, there are undeniable storms around Trump, but no matter how serious the storms seem, the president is still standing on a firm ground. And until the Mueller investigation stumbles on a beyond doubt evidence of conspiracy between the Trump Campaign and the Russians, the Democrats will be assumed to be pursuing the shadow.
The Democrats don't seem to see that the president is fulfilling his promises to the American people and is consolidating his hold on his base. They don't seem to see how vibrant the economy has become under Trump, with the rate of unemployment at its lowest ever and the bull market dazzling and everyone is talking about the positive impact the economy can have on voters.
That the economy is in a very good shape, despite the storms around the president is the real talking point that the president has going for him against the Democrats. But one question that is struggling for an answer is why would a man fight so hard to win an election amid storms and the storms have continued around him into his second year in office?
Many people around the president has been consumed by the storms as Cohen and Manafort's  experience have shown and the president is still standing. There is a lesson here from “The Rime of the Ancient Mariner” and it is that in Taylor Coleridge's work, there was a serious storm, many people got consumed and the sailor saw real hell. But the sailor survived the storm.
Comment Form is loading comments...
NEWS AND FEATURES
News & Features Around The World