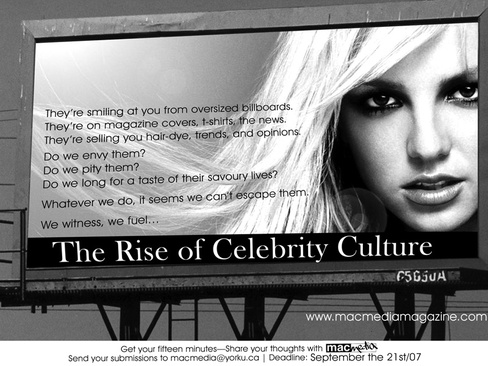 The Rise of Celebrity Culture (courtesy:macmediamagazine.com)
Nora is a female character in Henry Ibsen’s Doll House. But curious readers of Nora’s story and the failure of her marriage to Torvald will agree that the play is beyond marital issues for its profound portrayal of humans’ frailty to belittling attitude from others and the danger inherent in attempts to fraudulently prove a sense of relevance.
Torvald fondly belittled Nora with adjectives that represent smallness, lacking frugality and merely allowed her secondary role in the house as a wife per what the culture permitted at the time.
Turn Ibsen's Doll House around; replace Nora with a male character in poverty and make Tolvard a representation of the rich. Tolvard belittles the poor male character in Nora's shoes and the poor character decides to prove his relevance. It is the sickness of today's world. Get a ton of money - it does not matter how you got it - and you have arrived. It is about money power and people believe it can make you what you want to, from suddenly becoming a celebrity to a master in politics. You buy as many property as you can; fill your garage with automobiles and let everyone know where ever you go that you are a millionaire and you will be near making a character in Scott Fitzgerald's The Great Gatsby and Ernest Hemingway's The Sun Also Rises.
Today, everyone wants to be relevant in the scheme of things and the only way to be relevant is become a celebrity. Every immorality can be covered up as representing doing something to be noticed. Everyone wants to have a lot of money as a way to banner respect in the family and the society. And the only major pursuit by virtually everyone today is how to become rich. It is the determinant of immigration from poor countries to the rich nations by the poor who wants to have a bite of the action and the rich who want to maintain their wealth. It is the reason the rich does everything to hold to their wealth and never to fail to be poor again, because to be poor is a failure. And the characteristics of the lives of the rich and celebrities are behind the facade, and can only glimpsed by those who are fortunate to read the books that expose them. Like the good book - the Holy Bible - has revealed, some are getting there and destroyed in the process, while some are being destroyed ever before getting there.
One reason readers will describe Ibsen’s play as a feminine issue is its marriage theme, but to avid reader and analyst, the play is much beyond the marriage and feminine issue. What happened to Nora could happen to anyone who lacks ethical culture allowed in human relationships. Nora said it herself that she borrowed money from her husband’s friend to enable her care for her sick husband, but the wish to be relevant and prove her humanity to her husband made her lied that she borrowed the money from her father. Her lies to the husband became a nucleus of the trouble between her and the husband on one hand; between her and her husband’s friend who borrowed her the money and wanted to use the opportunity to flirt with her; between her and the society when she could not get the money paid to her husband’s friend, the husband became the boss of the lender in a bank and the lender wanted to use the opportunity of the money he borrowed his boss’s wife to evade punishment for fraud.
But Nora never fully paid the money until her husband’s friend revealed the truth to Torvald to make him drop the case against him in the office. He told Nora to use her influence to ensure that his position remains secure against her husband. This reveals a sea of corruption that compels Torvald’s reference to Nora as moral invalid.
Tolvard found that his wife's act was unethical and morally reprehensible; expressed disgust but he decided to keep the matter between himself and his wife from the society's knowledge, keptp the wife from influencing their children with her culture by keeping her away from her role as a mother! Though they still lived under the same roof and the society unaware of the evil between them. When Nora threatened to end their marriage, Tolvard compromised and said he had forgiven her. They could live forever in their bliss as if nothing had happened.