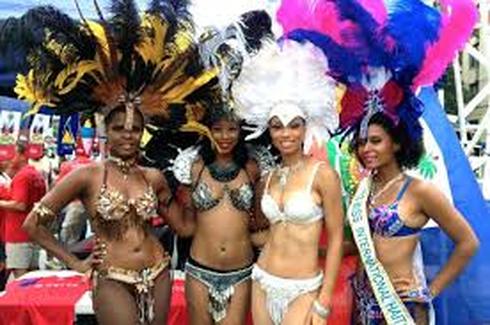 It is on show today at the Eastern Parkway in Brooklyn.
I arrived in the United States September 22, 2002. I missed the 2002 Labor Day celebration by the West Indian people in Brooklyn - three weeks earlier by a whisker. Three major issues in the country - the Halloween Day, the Labor Day and the presence of Orisha Church, confronted me as a new comer.
I lacked the knowledge of what the Labor Day and the Halloween Day stand for respectively, but I had a glimpse of the Orisha Church as a representation of the worship of a deity, the same way like the people in my birth place of Ile-Ife, Nigeria.
One evening, I asked my host, Godwin Ukuejebola, whose house I first stayed at Canarsie in Brooklyn for my first three months, about hangings on window, doors and around some houses that depicted shrines, on our way to Macys, close to his house in Canarsie.
He told me that it was Halloween season. I asked what was Halloween. He explained to me what Halloween was, and I said that as developed as America was, people still had time observing what I considered as ungodly worship.
Soon I started work in a car wash and I saw how Halloween was celebrated. After six months in the car wash, I moved and became a security guard. As the time for the Labor Day approached, colleagues in a store I was posted by my employer asked me whether I had ever witnessed Labor day celebration. I told the truth that it would be my first time to witness the Labor Day celebration.
They gladly showed photographs of the past Labor Days of women in their bikinis and promised me I would see a whole lot of women in their bikinis and luckily the store where I worked was on the route, where people going to the parade ground would travel through to the Eastern Parkway, where the labor Day celebration would be held.
The Labor Day arrived in September 2003. The store where I worked was jam packed by men and women in special costumes, with women in bikinis and some were near nakedness. As I watched the women in bikini with interest and took photographs, the bad guys, shoplifters,  came into the store holding knives. I moved away quickly from the Labor Day attraction.
I went into the workers' break room, locked the door behind and called 911. I watched developments in the store from the small window on the door; watched the bad guys stole what they wanted and walked out of the store, before the arrival of the police. I came out of the break room, explained to the police how the bad guys came wielding knives. The assistant store manager, who worked in place of the store manager acknowledge the statement I made to the police.
After the exit of the police from the store, we went back to watching the beautiful women in bikini. The day went by fast and we were still in the store when people trooped back from the event ground at about i800hrs. I was told that those who would have wished to stay longer were ordered out by the police. I came to the realization that one day a year for workers to celebrate out of 365 days is not too much.
The store manager asked me the following day why I called the police instead of calling the attention of his assistant who was on duty with me. He said the reason he asked was that his head office asked about who would pay $500.00 fees to the emergency services. I told him my life was important than $500.00 and that I wanted to be alive to celebrate and thank God the next Labor Day.
It is the essence of the Labor day holiday, a day set aside for workers to unwind, get together like the West Indian people do in Brooklyn every year, thanking God for His protection and his provisions. Surviving the days of hard work, hurricane and snowy weather condition, muggers and guns on the street, is worthy of time apart every year, for workers to reflect on how a year of commuting to and from work has passed and one is alive. On this day, every Brooklynite becomes West Indian.
Comment Form is loading comments...
NEWS AND FEATURES
News & Features Around The World