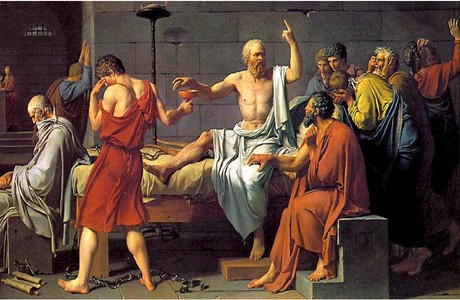 Socrates' receiving a cup of hemlock (Courtesy:themojocompany.com)
The Swiss people have spoken against freedom of movement between Switzerland and other European countries. Imogen Foulkes reporting for BBC says the Swiss government is bound to respect the peoples' wish because it is democracy at work.
The Swiss people are proud of their direct democracy in which everything is decided through referendum. The development in Switzerland is an opportunity to take a look at democracy and how it is currently faring around the world.
Democracy is government by the people for the people and the peoples' wish is final. In representative democracy, the people speaks through elections and their representatives in an assembly and in a direct democracy - through referendums. Democracy as can be seen is not a government of few powerful people over the majority.
The Swiss people say they don't want free movement, but the EU countries are catching cold, and almost threatening fire and brimstone just like a part of the world has been threatening the Nigerian government over its enactment of a law against homosexuality based on the peoples' wish. What the countries berating the Nigerian government like some Europeans countries are currently doing to Switzerland seem to say is that to them democracy has become a symbol of government leaders' decision as being supreme to the peoples' wish. It is where the difference between representative democracy and direct democracy manifests itself.
The Nigerian people and people in some other African countries say they don't want homosexuality as a way of life and they are saying that democracy is on their side. By this, they mean representative democracy where elected people take decisions on behalf of the people. But surveys have shown that majority of Africans in countries like Nigeria are against homosexuality. And if a referendum should be undertaken, the same will be affirmed.
The Swiss people say they don't want free movement. Notable European countries that have frowned against poverty migration labeling people from poor European countries as coming to gain on welfare package cannot now see similarity between what they have been debating in their countries against poverty migration and the Swiss peoples' stance against free movement. What does it matter if the repercussion of Swiss vote is against Switzerland's trade with EU countries? What does it matter if the people have voted in favor of homosexuality as long as it is their choice and it has not been forced on them by a powerful minority?
Africans said the Europeans gave them the Bible just like the Arabs brought the Quran and they accepted both. Now the same people who had brought the Bible said we should begin to act against the words of the book in the name of freedom and democracy. A large number of people are asking about the definition of democracy and whether it is not the rule of the majority against the minority; whether democracy means everyone can do what he or she likes, moral and immoral notwithstanding? And in which case anyone who wants to be gay can be gay, while those who want to be prostitutes can be prostitutes. They are asking why the society frowns against prostitution and approves gay? They say if democracy means for everyone to live the way that pleases one, why punish one immorality and praises another?
These are hard questions. It is what philosophy is all about. It was what Socrates' taught young people - to ask hard questions - that caused his problem with the politicians who sought to rule against Socrates' choice to teach young people to ask questions. Today, people are saying that the politicians don't seem to be better than in Socrates' days in their application of democracy. They are saying that in most of the western countries, politicians have sold out to special interests and compromised the wishes of the people. They are saying  the direct democracy that exists in Switzerland, where issues are subject to referendum is the best form of democracy.
They are saying that if the issue of homosexuality is subject to referendum in most of the western countries that homosexuality will die. They see allowing the representative democracy and the courts alone to decide what affects the peoples' way of life as a fraud against the people and opposite of real democracy - the direct democracy.