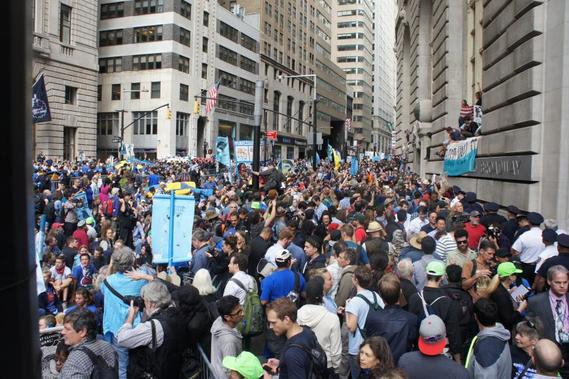 A crowd of protesters in Downtown Manhattan (Courtesy: Newsweek)
Americans' observance of the President's Day on Monday is a good remembrance of the conflict inherent in Democracy as a form of government.
It is also a remembrance of the toughness of the position of a leader, assumed as the most powerful man in the world, and who is expected to solve problems facing his country and at the same time attend to the world's problems.
One political science lecturer described political power as the influence inherent it and as capable of intoxication. Therefore, no one who has occupied such a powerful office will like to surrender it to another.
The same is applicable to political parties.to which losing political power at the center is akin to dying for the number of years it will require to be in the cold and bounce back to power. It means that many people, who may have considered members of such party as influential in helping to getting things done, will henceforth be considered as inconsequential, in the scheme of things.
Such transformation from being considered as powerful to suddenly an ordinary folk is not only painful, but capable of leading those affected to depression. Therefore, the only way to justify tough fights often demonstrated by people in opposition to justify their unenviable role in a democratic dispensation is that the president and his party need to be held accountable. People, who were once in the corridor of power, whom the people formerly took their problems to or looked upon, for solution, could now only be heard through protests and demonstrations.
Not many people loves the conflict that is present in atmosphere of chaos, which protests and demonstrations cause, and the seeming lack of understanding between the president's party and the opposition. The president and his party think that they have the right to introduce programs based on campaign promises and the opposition think they have the right to slam the president and his party for lack bipartisanship.
These days, such discordant tunes present in the public against the president and his party is made worse by billionaires, who seize upon the opposition's disaffection, join the opposition and help with dirty money for the opposition to rent crowds as protesters, using their dirty money to cause hell and chaos, where there should be equivalent of peace, if not total peace. This moneyed class seizes on the opportunity of the claim of oppression by the opposition to address their own secret political agenda.
The President's Day on Monday recalls the recent noise in the United States over the ban of certain immigrants, rented or paid protesters and demonstrators, and the president's recourse to campaign type of public address of his supporters, to show that he is also has a political base that matters.
It is certain that no one hates conflict, because people say without conflict, there can be no addressing issues and there will be no progress and it will amount to like being in an autocratic state. But the same people say that when conflict becomes judgmental like one group views or judges one group as deficient and incapable, without considering the fact that these people have the right to be where they are, by the power of the people's votes and that being there is not based on written examinations as done in schools, to determine level of intelligence or otherwise, people in the group that considers itself as wise and all knowing like God, need to have a rethink and understand that they acting beyond and above their place as human beings.
Everyone need to be in position and play their role without usurping each other's position and understand that God does not dwell in chaos. There is a lesson about Elijah's experience in the Bible about the importance of not usurping other's positions and thinking that God exists in confusion. . He was running away from For the love of his life, because he knew Jezebel possessed an evil power to destroy others.
When God passed by and a great strong wind rented the mountains, Elijah thought wrongly God was in the wind. An earthquake followed the wind and the Lord, we were told, was not in the earthquake. And  the earthquake was followed by a fire and God was not there. While at the entrance of the cave, he heard a shrill voice, "What does thou here Elijah?" He knew not that he was in a wrong place. He had left his position running away from a mere mortal like him, lacking understanding of the power of God, whom he said he served.
Elijah was ordered to go back into the wilderness of Damascus and to anoint others, who will carry out the destruction of the evil personalities, who were working against the will of God. And God made it clear that Elijah was not the only true prophet remaining in Israel at the time, but seven thousand of such prophets remained in Israel at that time. .