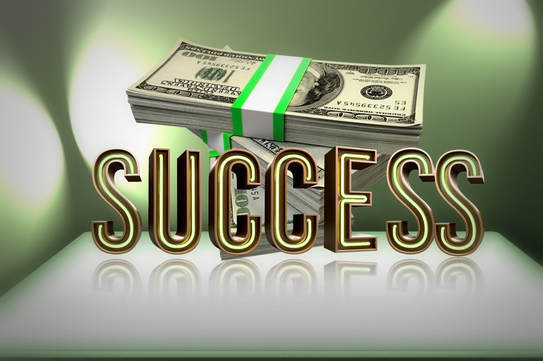 Money represented by dollar bills as a sign of success (Courtesy: pixabay.com)
The scripture describes money as the source of all evil. Yet, money is something everyone seeks after, because life is miserable without enough of it. You want to own a roof over your head or pay rent  and other bills, you need money.
And whoever has experienced the pang of hunger for lack of money to get food will understand the evil of lacking money.
It is very difficult why many people among the obviously rich don't want to agree they are rich when asked whether they are rich or poor. They prefer to tell the world they are comfortable. Yes, everyone want to be comfortable. To have money when needed to access essential needs.
At least to have money to meet essential needs is the need of everyone and not to be at the mercy of more fortunate fellows to eat or pay necessary bills. Children expect their parents to be able to ensure roof over their heads, food on the table and clothes on their backs, as well as funding their education, in these days that education has become the determinant of human's ability to reason.
It is believed that we work, because we want to earn money, to meet our needs. It is believed as well as what has made money to be all that important since the days that it has become the  means of exchange and displaced the trade by barter. Unfortunately, some people have the fortune of having more money than others, and that being others misfortune for not having enough money, as their counterparts. .
The society naturally respects and praises people who have money with little or no respect at all and no praise for the struggling people. You will think that the Renaissance has changed that. But the professionally successful in the arts whose recognition has been enabled by Renaissance only join the wealthy class as celebrities and thus widened the chasm of inequality in the society.
There are times one hears people discussing that money does not matter in the state of affairs in the society. But those who know have derided such a statement about money as coming from people who lacks the knowledge about the importance of money. They say it is money that makes people in some places to work 16 hours a day before going back home to rest.
They also say it is money that makes people to leave their homesteads and begin to pursue what has not been lost millions of miles away from home. They say that if it is not for the pursuit of money, why would anyone leave his or her comfortable temperate zone and come and live in an intemperate zone with cold knocking sense out of one's life?
The need and pursuit of money is responsible for immigration from place to place, especially from poor countries to rich countries, safe the rich who immigrate for the comfort of the journey to know other places. It is money that confers a sense of wealth.They say having plenty of money than needed and not having enough as needed makes the difference between the kings and the wealthy from the poor. if you go to places of worship, prayers for money and wealth is the same as prayers for protection and defense against illnesses and untimely death.
​    People agree that we need good health to work for money and wealth. At the same time, it is agreed that without money to meet essential needs, good health will be at risk of jeopardy. They also say that people in regular employments are not the money makers, and that the money makers are in unmentionable places, risking their live and everything they have got for the sake of money.
People say money matters to fulfill the needs of rent or mortgage and bills payment and other essential family needs, but not at the risk of one's life or good name. And that essentially money makers don't care about their lives,family and good name.
Yet, the rich and the wealthy are known to use the power of wealth and its influence for temporal protection from vicissitudes of uncertainty. Being what the poor cannot afford and the reason the poor relies on prayers to God, seemingly like cows that lack tail to ward off the flies.
Widget is loading comments...
NEWS AND FEATURES
News & Features Around The World