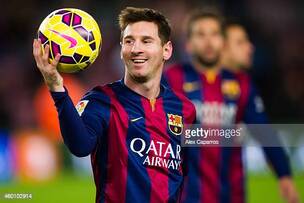 Lionel Messi, hero of Argentina's victory.
Argentina defeated France on Sunday in a penalty shoot-out to lift the World Cup after 90 minutes and extra time that ended 3-3 in Lusail stadium, Qatar. Argentina was up by two goals in the first half against the defending champion, France. The fact that Argentina succeeded in locking down the France team in the entire first half says much about the control of the match. Why have the France guys developed heavy feet?
The first shot at goal by France came in the second half's 71st minute after Argentina had put two goals behind the net in the first half. And then woke up in the second half and tied the match by scoring two goals in quick succession!
France seemed to have suddenly realized what was at stake - the loss of the championship and Mbappe's hope for the golden boot going into oblivion. No wonder, Mbappe scored the penalty for France and topped it with another goal to even the cores with Argentina. Even if Messi should achieve another goal before the end of the game, he is sure to be tied with Mbappe, now confident of the golden boot.
French supporters would not quickly forget Mbappe's heroic goals of saving the country from what may have resulted in humiliation by Argentina. There would have been no extra time without the two goals by Mbappe. The Argentine team suddenly found itself in a mess requiring a solution. Messi nearly got the answer in the 97th minute, but the France goalie saved the situation making the extra game time.
As the game went into extra time, supporters who had said France would defeat Argentina 3-1 without any statistics to back it up have failed. They prophesied Argentina's humiliation, but they have seen authentic soccer - accurate entertainment on display. The world had noticed that the best two teams in the tournament were in the final. It did not matter which of them won the match.
France's ability to pull back two goals in the dying minutes shows why people should always hold their breath before the final whistle. It is a game in which anything can happen when it is still in play, unlike when it has ended. In the same vein, France and its supporters will never forget Lionel Messi as a thorn against its team, nor will Argentina forever forget Mbappe.
​   As the game progressed in the extra time, supporters on both sides of the aisle could not help but be resigned to fate as more goals were scored by both sides. It was clear the game would end with a penalty shoot.
Argentina succeeded in stopping France from repeating the victory in the Mundial back-to-back. Argentina took the cup away from France. However, the golden boots will go to Mbappe. He deserves it unless the record of goals scored by individual players proves otherwise.
It was a sweet victory for the Argentinians, led by Messi. What would happen if, after leading by two goals in the first half, allowed France to level up and defeat them? That favor followed them into the penalty shoot-out was the crowning of the hard work they put in the game from the beginning.
NEWS AND FEATURES
News & Features Around The World