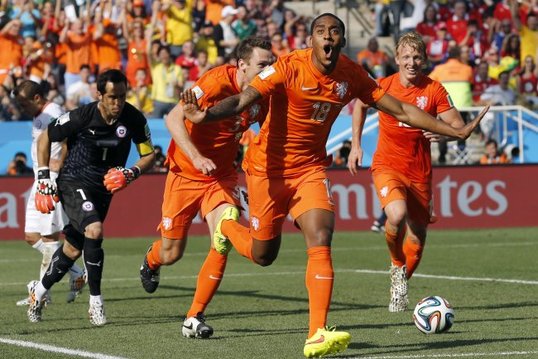 Netherlands players jubilating after one of its victories early in the tournament
Netherlands defeated Mexico in the third game of the round of 16 by 2-1 on Saturday, through a penalty kick in the 90th minute of the game. The kick resulted from Netherlands' No 11 player continued pressure on the the Mexican defenders, through the right flank and he was brought down in the box. Netherlands has thus qualified for the quarter finals.
Mexico scored its first goal in the 47 minutes of the game, a reward of continuous pressure on the Netherlands. An effort from left footer near the 18 yard box that the keeper's full stretched body could not stop, unlike others before it. Netherlands equalized in the 87th minutes from a volley from the No 10 jersey outside the box.
Netherlands push for a goal after the Mexicans' goal led to a 56th minute safe by Mexican goalie from a Netherlands tap on the ball during a goal mouth melee following a corner kick. Another 60th minute effort by the Netherlands for a goal was saved by the keeper. The pressure by the Netherlands through the right flank by the No 11 player thrice almost resulted in goal.  The keeper thwarted his effort twice, while defenders stood between him and his effort on one occasion.  The keeper again saved another goal bound ball in the 86th minute. The pressure bore result in the 87th minute, when the number 11 player succeeded at a earning a penalty.
Mexico had missed its first chance at scoring 17 minutes of the game. This was followed by Netherlands cutting from the right flank after holding to the ball for a considerable length of time. The Netherlands effort was followed by yet another Mexican effort at goal and nearly resulted in boot to head for a Mexican player from a Netherlands'  player.
The Netherlands' players possess strength and determination of holding the ball, run with it across line of opponents legs. But goal refused to come early. The Mexican perfected playing volley shots from distance. The first of such shots from a No 3 jersey Mexican player was pushed into a corner by keeper.