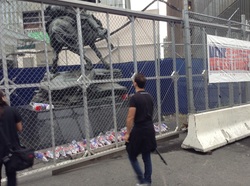 Although time flies, people still cannot forget, were thoughts that ran through the minds of people who heard Uwajemu R, Poland Spring water distributor, whose time of delivery to buildings around the Downtown Manhattan - very early before workers's arrival in their offices - said on Friday, he needed to complete his rounds, before trucks will be barred anywhere near the World Trade Center.
Uwajemu's words quickly reminded people around him that the day was September 11, another day for the memorial of the dastard attack on America by Al-Queda,14 years ago. The words were also a reminder that a new edifice is already standing where the destroyed edifice once stood, and that the beauty of the landscape had been restored, and that people (tourists) have turned the place to attraction center.
True to Uwajemu's words, as early as 0700 am, police have quietly taken their positions around the edifice. Police bans moved around delivering necessities like road steel barricades to places they had not been delivered before that time in the morning                       , because as Uwajemu had said, all the roads leading to the World Center vehicular movement was to be restricted on certain streets leading to Trade Center.
A day earlier, about 14 flowers in wrappers had been placed in front of a monument with a horse elevated on top of what seems like a collection of rocks, the rocks placed atop of what seems like a metal box with wordings, 'America's Response Monument'. A large number of people moved in and out of Path Train station. There has always been a large number of human movement here, but on this day, the number of people have swelled.
On the Path Train, a young woman sat in a car, holding naturally to her bag with no smile. Curiously, an American flag, old and appears to have seen several years of existence in frequent clutch lies on her bag. She exited the train at Exchange Place Station. The sight was another reminder of people who lost their lives in the mindless attack on innocent people in on September 11, 2001,
and their relatives who have continued to remember their loved one on this day every year.
The sight of the young woman sitting quietly on the train without a smile, the American flag sitting on her bag, the flowers sitting in front of The American Response Monument are all symbols that reminds people of a sense of loss and memorial. As a reporter making your back into the city later towards evening hours, you saw another guy clutching a yellowish shrub and walking the escalator toward the Trade Center, still a large crowd in front of the a Trade a Center in assemblies; some selling artifacts and mementoes.
As you walked and passed the crowd, you noticed that the police barricades were still sitting comfortably on some of the streets and police officers keeping eyeful watch over them. You knew there must have been a ceremony there at the Trade Center earlier with government officials and relatives of victims of the attack in attendance.
The year's memorial was on its way out. After this, there will be another, as it has been for the past 14 years, because it is hard to forget those loved ones. And not the attack and the destroyed monument, because a new monument is already in place and the attackers vanquished to utter forgetfulness. But can we ever forget the loved ones that are dear to us?