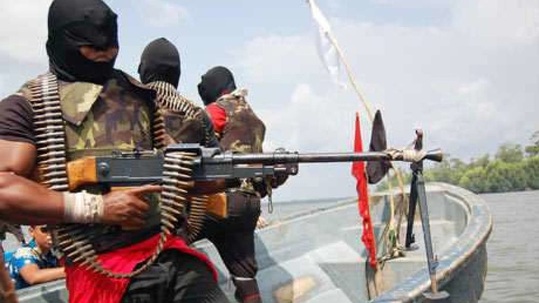 The Nigeria's Delta Region Avengers
President Muhammed Buhari is currently on holidays in Britain, according to a release from his office in Abuja. The release says that Buhari's decision for holiday in Britain follows an ear infection and the need to follow up treatment by his  Nigerian doctors.
There is already mammoth criticisms for Buhari's decision to seek further medical attention by some Nigerian doctors, who say Buhari's decision to seek further medical examination abroad negates government's policy that says political office holders cannot seek medical attention abroad.
But some other observers note that one major reason curious observers, who are questioning Buhari's decision to leave the country on holiday for medicals at this time have glossed over, is the tense political and economic situation in the country. They say that politically, the country seems to be faced with two major dangers:
According to these observers, they say some groups in the Eastern Nigeria are calling for the renewal of the Biafra Republic, and the people in the Delta Region live in the danger of watching those who call themselves Avengers destroying oil installations, as a revenge against what the Avengers call the Nigerian government's abandonment of the area in term of economic development. Last week, 10 people were reported killed by law enforcement, when the Biafra Republic agitators held a protest demonstration in Onitsha.      Economically, the current government in Nigeria says it is working to correct anomalies in the system and some of its policies have resulted in economic hardship for many Nigerians. Poor Nigerians say one has to be rich not to feel the current economic hardship in the country. The government's apologists also accept the verdict, but they say that it is the consequence of past corruption in the system, which they say has to be corrected for Nigerians to enjoy economic boom in the near future. They fault the government's fight against corruption as targeting only the last government and that whole lots of individuals, who have enriched themselves in the past while in government are left untouched.
Just smarting out Boko Haram hemorrhaging in the North East, now faced with near economic doom and the Avengers' destructive instances in the Delta Region, Nigeria faces an equivalent of Armageddon. And why Buhari must choose to travel out of the country again, after incessant complaints of his much travels, is beyond observers. The only reason, curious observers have advanced for Buhari's holiday in london at this time, is that Buhari is under enormous pressure.
Buhari himself said it that he was under pressure to devalue the Naira, but that he had refused to devalue the Naira to save poor Nigerians from avoidable suffering. But suddenly, he announced the upward movement of the price of gasoline from N99.00 to N145.00, leading Nigerians to a state of untold suffering he had said he was avoiding. And before he went on holidays, the Naira's exchange rate to the dollar went  from where he had officially pegged it against all entreaties, to N300.00 to the dollar.
News reports said that Buhari had ear infections and that he had traveled on holiday and would also seek further medical intervention abroad. Meanwhile, the United States mission in Nigeria had expressed concern over the rising violence and attacks in the Niger Delta, saying it was monitoring reports of attacks and other incidents in the region, according to a report in the Punch newspapers on Tuesday. The mission said in the report that it shared the concerns of all Nigerians about the attacks, adding that it was in support of efforts, including dialogue, to address the grievances in the Niger Delta. “We encourage all parties to resolve their disputes through peaceful means and human rights of all Nigerians must be protected." But reports say the situation in the Delta is like a war situation. The Nigerian solders are looking for the Avengers and members of the communities have complained about soldiers highhandedness in the soldiers' search for the Avengers. Meanwhile, Buhari has reportedly ordered soldiers to seize their operations in search of the Avengers, to give peaceful resolve of the situation a chance.
For a long time, successive Nigerian governments have been patching the problem arising from the Delta region, while enjoying the money accruing to the country from oil sales, to the extent of government officials sharing of oil blocs among themselves. But today, the crash in the price of oil has brought the country to its kneels.No more money to share or waste. It is time to face the reality of the situation of Nigerians living in the Delta Region in deprivation.
The way the Avengers, said to represent the deprived people of the Delta Region, have been bombing and destroying oil installations, which according to its release, it is to bring the country to its kneels by shutting out oil production, amid statements that there is no more room for patch works with the Nigerian government, is the new worries for Nigerians. Would Nigeria remain one country under Buhari with the Avengers and the Biafrans asking for their own separate countries?
NEWS AND FEATURES
News & Features Around The World