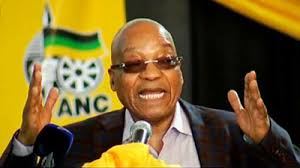 Jacob Zuma
Jacob Zuma may have survived the reported push by ANC veterans' to oust him and the need to sanitize the party.
Reports from South Africa say that Zuma, whom the public has hitherto viewed as under serious threat of losing the battle for power has started fighting back.
Some of the veterans, after a meeting with Zuma and some ANC top members, said their intention has never been to ask Zuma to step down, but sanitize the party. and find a way to improve the party's image and performance in the polls.
However, prior to the meeting with the ANC veterans, reports show  that Zuma had prepared for the worst and that his weapon for his fight for survival was resort to the old alibi - white power fighting the ANC.
Eye Witness News reported earlier on Sunday that it was clear that Zuma was fighting against a regime change agenda within his own party and that he was expected to meet with ANC veterans, who had called for him to step down from office, and the report said that Zuma was to be accompanied to the meeting by six top ANC members.
The ANC veterans were said to be worried, about the party's dwindling support at recent polls, and issues at the South Revenue Service and the National Treasury.
Zuma was reported to have spoken against his critics in various political parties and the civil society, saying that he had information against those demanding his ouster, which he would one day reveal to the public. Zuma  was reported to have said there were people a part of a funded campaign against the ANC and were being used by white monopoly capital to destroy the ruling party, because the party remains a threat.
However, reports says that the situation is tough for Zuma, because he is facing a threat from members of his own party, seeking a way to improve the party's lots, an indirect expression of no confidence in the current party's leadership.
The ANC veterans are said to be fighting to save the party's legacy, which has been journeying toward ruin, since Zuma's election, rubbishing the star-studded legacy of Nelson Mandela's era.
NEWS AND FEATURES
News & Features Around The World