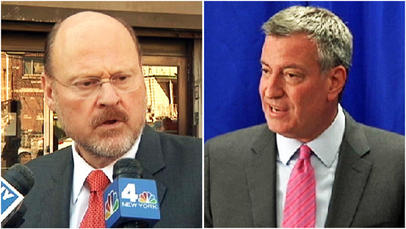 Lhota and Deblasio (www.newyorknbc.com)
As the matter stands in the polls, people are saying it will be short of expectation for Bill Deblasio -  the Democratic candidate in today's Mayoral election against Joe Lhota of the Republican Party - not to win with a landslide.
Yes, New Yorkers are voting today to elect a new Mayor who will succeed the outgoing Mayor Michael Bloomberg, who is completing a third term of twelve years in office.
The day’s election is the climax of October 5 Primaries that witnessed the emergence of Bill DeBlasio and Joe Lhota as Democratic and Republican Party candidate respectively.
Some New Yorkers are already saying they know who will be the next mayor and that the day’s election is just a formality. Their calculation is based on New York as a Blue State and the Democratic Party candidate’s popularity here,  and who is already ahead of the Republican Party candidate with a wide margin in the polls.
The encounter between Deblasio and Lhota on the campaign trail has not witnessed the type robustness of the primary campaign. People say Lhota’s campaign has been lackluster and that he has merely been critical of Deblasio’s stand against the Police’s Stop and Frisk policy. His advertisement that says Deblasio will take New York back into the dark days of crime is popular and the Court of Appeal's decision that favors his position on Stop and Frisk policy has come a little late.  Aside from the Stop and Frisk, Lhota does not have any
other policy issue that has put a shine on him over Deblasio. Lhota has been consistent is his clamor against Deblasio's past political association with socialists, whilst Deblasio has not said he is a socialist.
Lhota is a man with a wider experience than Deblasio, having been a deputy mayor under Rudy Guliano and immediate past chairman of the Metropolitan Transportation Authority, MTA.
Deblasio was public advocate in the City Council before his candidature in the Democratic primaries and his election as the candidate to slug it out with Lhota over who would be the next New York City's mayor.