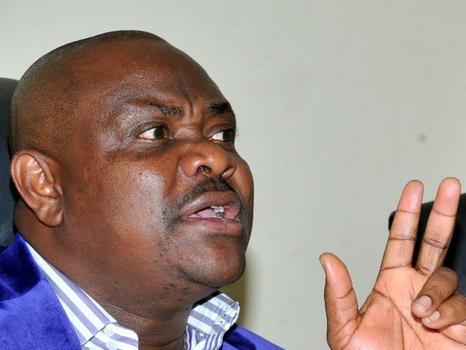 Nigeria' minister of education
A game of power is being demonstrated between the Nigerian Government and the Academic Statf Union of the Nigerian Universities, ASUU, whose members have been on strike for about six months. The government thinks it has finally say over the institutions of higher learning, But ASUU is saying it has more power than the government.
Effort to end the lecturers' strike has witnessed meetings upon meetings without an agreement.
One of the highly respected members of the academic union, Professor Festu Iyayi, lost his life on a road accident on his way to one of such meetings in the north of the country, in an encounter with a governor's convoy road rage.
Just one week ago, Nyesom Wike,  the minister of education called on the striking lecturers to return to work or lose their work. Some of the institutions' administrations announced notices in the press that schools will resume in the week of December 4, while members of the union have spoken through the same press for parents to keep their children at home for them to be safe.
Some observers are saying that the government should not have given the week of Iyayi's burial program to order the lecturers back to work. They say the government ought to have allowed them to bury Iyayi as a mark of respect for the dead and the following week order them to work.
Observers are saying that ASUU's members statement  indirectly means that the union may have asked its members to disobey the federal government's directive. Many Nigerians too don't believe that forcing the lecturers to return to classes is a way to resolve the impasse between the government and the union.
But some other people are saying that when two elephants fight, the grass suffers. In this case, the students are the grass and the worst scenario of the union's strike is that Nigerian students attending these institutions have been sitting at home rusticating, doing nothing.
It is not the first time that the union and the government are at loggerheads over salary and condition of service. It has become a culture between the government and the union and the students who are affected by such relationship. But the union has made it clear that it is not agitating for salary and conditions of service alone, but for total overhaul of the entire infrastructure of the nation's government owned institutions of higher learning that have since become mere glorifying edifices, because the numbers of time students are forced to stay home for strikes and lockouts due to strike by lecturers or students themselves are more than the time student attend classes.
Parents who are rich - and one of the reasons parents must have to be rich in Nigeria at all cost - send their children to private schools or study abroad at a cost capable of luring parents to seek wealth at all cost. Many Nigerians believe that students of the wealthy class hardly attend government owned institutions. They are either studying abroad or are in privately owned universities. For this reason, observers say successive governments in the country do not pay attention to infrastructural needs in its higher institutions of learning.
In the same way that the rich have taken their kids abroad or into private institutions to escape the deadly impasses between the government and the union, many lecturers have found their way abroad seeking greener pastures. For those who still remain in Nigeria, the private institutions offer alternatives.
One of the reasons that pundits of the situation are citing for the deadlock in the the meetings between government and ASUU is that some of the professors still find possible part time lecture work that may be better in renumeration than returning quickly to work in their deadbeat desks in government schools.
One perturbing development that members of the public find difficult to understand, and which they cannot hide is that President Goodluck Jonathan is himself a former university lecturer and who must have been a member of ASUU. By his position, the public says that he ought to know what the universities are lacking in term of infrastructure and what to commit his government toward lifting the schools from abyss and making life more amenable for his former colleagues.
ASSU says it is not fighting for members' renumeration or condition of service. iI says the public knows its reasons for calling the government's bluff. Does the public really these reasons in specific terms? The same public is saying that If these lecturers don't like the university environment where they work, they should join others like them who have found solace abroad or in private universities in the country.
Members of the public are saying that these questions have become imperative, because the kids need to go back to classes and save the poor who have chosen to send children to school as the only hope from poverty ridden life, and the class from where everyone is seeking an escape.
Widget is loading comments...
NEWS AND FEATURES
News & Features Around The World