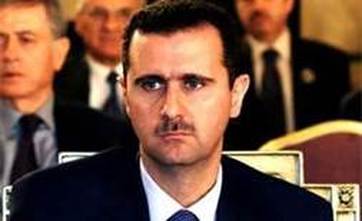 Bashir al-Assad
Does Bashir al-Assad think the Russian weapons will save him having failed to save Muamar Gaddafi in Libya? Bashar al-Assad and the rebels who want him ousted seek hard to comeby assistance, making Assad's forget God and trusting in Russian weapons.
How can one describe Assad's basking in his announcement of the arrival of some shipment of Russia's S-300 missile defence system? Observers view Assad's announcement and the rebels' cry for help to their own lords, a laughing stock of what has become men's reliance on helpless strength of men in the bid to acquire or retain same powerless power.
The news is all over in the newspapers and the internet about Assad's gleeful announcement. The New York Times and the BBC both titled their first news report as Assad saying that Syria had received the S-300 missile defense system, and later in the day the titles changed to Assad's warning to Israel against strikes. Assad believes he has received stockpiles of weapons capable of saving him from the sinking boat that his throne and power have become in Syria. The rebels don't fare better. They too, like Assad, have been crying to their  lords to bring in the aircrafts that will seal off the air defence system against Assad to allow them turn him and his commanders into mere statistics.
Assad is seeking to power to aid his intention of remaining in power against the wishes of some powerful elements who wants him ousted. Just like his own father did and came to power and later paved way for Bashir among his siblings. Just as there are powerful elements that want Assad ousted, so also are others who wants him to remain in office. There are those who benefit from sales of weapons to both sides in the conflagration. Against Assad are the forces of moderation and openess around the world who want to see every Syrian eligible to become what they dream and wish in their land of birth; have the freedom to choose their leaders and ask questions about how the countries resources are utilized. The disagreement, between Assad and his friends on one side, the rebels and their friends on the other side have turned Syria into a ball of fire.
This fire in Syria does not seem to be ebbing and may not ebb soon. The rebels are not getting the assistance they require for suspicions and confirmations that Al-Quida linked groups are playing more than necessary roles in the prosecution of the war against Assad. The powers that helped in the killing and ousting of Muamar Gaddafi in Libya had been skeptical in stepping forward to avoid a repeat of Libya's experinece in Syria; the fear that Al-Quida forces may take over like they have done in Libya and peril the presence of freedom loving people in Syria. One recent development that may have created belly ache for observers of events in Syria was the reported commander belongng to the Free Syria Forces who carved the heart of a dead Syrian fighter and ate it!
Occassional attacks by Israel to deter Hezbollah weapons from crossing to Syria; Hezbollah forces throwing their weight to help Syria and Russia's determination to ensure friends of the rebels don't carry out the Libya type of intervention amid stories about the use of chemical weapons and inability to determine whether Syrian forces or the rebels use the weapons have turned Syria into a land where anything is possible. Imagine Assad telling the world that he had received shipment of S-300 missile defence system and Al-Jazeira and another news online  reporting the following day that a source in Russia said the missile defence system are yet to be delivered to Syria. However, the usefulness of the S-300 to Assad is not in doubt. Reported to be useful in deterring foreign air intervention, Israel officials said that they would do everything in their capabiity to forstal their installation, which reports said could take about six months to install. And some European countries are urging Russia not to give the S-300 missile defence system to Syria.
Reports say the situation on the ground in Syria is getting better for Assad. A doctor attending to the wounded in Qusair told the BBC in anonymity. "It started with the Free Syrian Army and the Assad regime and after two years they are tired of fighting but Hezbollah has definitely changed the game. They have come in, they have definitely strengthened the Assad's Army in Quisair." In this case, the rebels have been unfortunate that the U.S they look forward to back them is facing sequestration at home. Secondly as one writer said, America has no reason to put its boot on the ground in Syria, because despite Assa's madness, he has not threatened America's interest or that of an American ally. But Assad has issued a warning that if Israel attacks Syria again, Syria will respond.
If the current sitaution in Syria continues, so also will the ding-dong between the Syrian Army and the Free Syrian forces, and with innocent civilians caught in between the calamitous situation. With about 70,000 and 80,000 lives already lost to the destructive scenario between two evil possessed squads, their friends around the world supplying the weapons for the murderous assignment in power struggle, even without the friends putting their boots on the gorund in Syria, they are already partakers in the destruction of humanity there.
Ordinary people in Syria need our prayers.