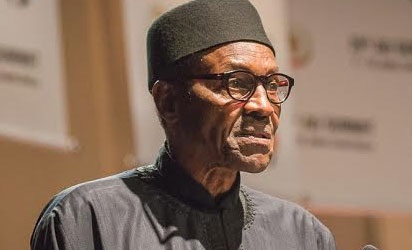 Buhari's recent photo as published in the Vanguard Newspapers)
President Muhammed Buhari of Nigeria and his special assistant on media and publicity, Femi Adesina, have disagreed on the impact that age can have on the performance of a president. President Buhari had said that his performance as a president at his present age of 72 might not be as sterling as when he was a younger fellow at 40, the age when he was Nigeria's military head of state. The president was frank in his statement to Nigerians resident in South Africa, where he attended the just concluded meeting of African leaders, that he shouldn't be expected to do the job of saving Nigeria alone.
By the time the president arrived in Abuja in Nigeria from South Africa, the wordings of his statement had changed with Adesina, who said that the media and the public had misinterpreted the president, and Adesina's  words in a signed press release were reported as emanating from the president.
Many people are saying that it is not quite clear whether it is the media and the public or the president's spokesman who have misinterpreted the president. But  hindsight and following the truth as per the president's statement as reported by the media showed that the media reported Buhari without misinterpretation. The report aroused public's interest that caused a call for the resignation of the president from a section of the polity. The public's criticism of the president was based on the truth of the president's statement. Adesina's outright charge of misinterpretation against the media and the public before he mentioned what gain will accrue  from the president's age is the center of a silent debate about the unsavory acts of president's spokesmen in Nigeria.
This is an excerpt from a Punch Newspaper's report of the president's words in South Africa. "President Muhammadu Buhari has admitted that his age would limit his performance as the President of the country. Buhari, who was a military governor at 33 and Head of State   at the age of 40, said he would have loved being a President when he was at a younger age . He will be 73 on December 17, 2015. The President spoke with Nigerians resident in South Africa on Monday after taking part in the 25th assembly of Heads of State and Government of the African Union   in Johannesburg. He said, “I wish I became Head of State when I was a governor, just a few years as a young man. Now at 72, there is a limit to what I can do.” Despite his advancement in age however, Buhari gave assurance that his administration would make a difference."
Below is a statement based on a press release by Adesina, the president's spokesman and published by the Nigeria's Premium Times.
"The presidency has issued a statement in reaction to reports quoting President Muhammadu Buhari as saying his age would limit his performance as Nigeria’s leader. In a statement Wednesday, the Special Adviser to the President on Media and Publicity, Femi Adesina, said the president’s statement in Johannesburg was misinterpreted.“As the saying goes, “old wines are tasty” and the President Buhari we have today is a man, like old wine, that has got tastier,” Mr. Adesina said. “At 72, yes, he can’t be called a youth, but he has in quantum the wisdom, the patience, temperance and forbearance that age brings. And all these virtues he has brought to the Presidency, to make a difference in our national life.”
From the two statements above, what the president and his spokesman said are not similar. The words of the president and his spokesman are  opposite of one another. If the president was not the one who had made the statement attributed to him or that the public had twisted the president's word's out of context the reason for the spokesman's word would have been understandable. But the context for the spokesman's statement seemed to have questioned the president's wisdom. What is manifest here is zealousness of the spokesman to do a damage control, but did it in a way questioning the media's and the public's integrity, rather than limiting himself to say that the president should be expected to perform irrespective of what he had said in South Africa and lace it with whatever he thinks old age will bring to governance.
Though, a section of the public had asked for the president's resignation based on his statement in South Africa about his current age and strength, and that he possibly cannot do it alone to give Nigeria the desirable change, observers say that the spokesman would have helped the president by avoiding the word 'misinterpretation' in the press release. They say no one has misinterpreted the president, notwithstanding that the public agrees that old age has its positive contribution to human relevance.
The president's statement in South Africa, the news report about the statement, public criticism of the president and what so many critics had said about the president's age and the likelihood that the age could impair his performance in office, recalled what some observers had said about the president's age during the electioneering campaign, a criticism Buhari apologists had waved off as political and irrelevance.