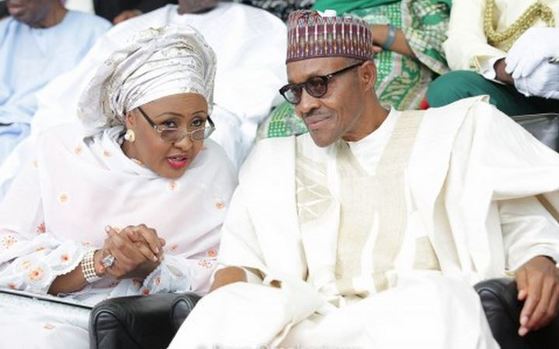 Aisha Buhari and President Buahri
Aisha Buhari, wife of President Muhammad Buhari of Nigeria, is proving to be courageous,  daring to speak out, where others so privileged will not.
Not necessarily for challenging Nigerian men to stand up to the cabals she says are holding the country's development back, but that cabals determine decisions in her husband's administration of the country.
Although, Mrs. Buhari tries to paint the government in the country as achieving the objectives as expected of it, but that the country would have achieved much more without the two cabals she says are undermining the country's administration.
But Mrs. Buhari has not mentioned names. In addition to her statement made at a forum attended by Vice-President Yemi Osibajo, she accused people who she said knew these cabals of going behind the scene to seek favors from the same cabals. Who are these cabals with whom President Buhari may have been interacting in the management of the country?
Has the country's media do anything to speak to the information minister or the president's media handlers, or get an interview with Aisha - for her to name these cabals, the reason she thinks they have been able to hold President Buhari captive with the country from benefiting from what she believes Buhari is capable of offering?
Why should Mrs. Buhari not blame her own husband for allowing the cabals' operation around him, instead of blaming the cabals for doing the work allowed them by her husband? Whom do Nigerians think is culpable in this matter: The cabals or the president? Does the bulk not stop on the president's table in Nigeria?
Given that it is not the first time Mrs. Buhari has talked about cabals operating in Aso Rock - the seat of the federal government in Nigeria, it is not out of place to expect either Lai Muhammed, Femi Adesina or Shehu Garba to speak out on this matter, because the Nigerian government is not supposed to be operated by cabals, but but their elected representatives. Therefore, it will be interesting to hear who these cabals are and if they are not cabals, explain to the public why she has labeled them as cabals.
Unlike the first time that she accused her husband as a captive of cabals in the state house with a vow not to campaign for him for reelection if he fails to stop the cabals, she is campaigning for her husband now. Perhaps, she has forgotten about her vow. If she has forgotten, Nigerians cannot forget especially amid high price like fuel and food, a drastic fall in the supply of electricity and all time high unemployment rate.
Of course, observers expect Nigerian men .to accept Mrs. Buhari's challenge to them by leading the campaign against Buharis' election to pave way for the defeat of the cabal she has mentioned as having taken over control of government from her husband, because a vote for Buhari will be a vote for cabals.