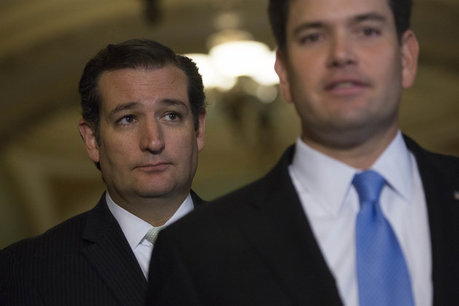 Marco Rubio and Ted Cruz, two candidates the Republican party establishment places hope but is failing.
It is the first Tuesday of the month. The United States presidential election primaries has moved into a tempo with a momentum and attention from all over the world.
On top of the bill among many issues in the election are immigration and defense of the homeland against terrorism.
One man named Donald Trump has taken a position on immigration and terrorism, which the establishment in his party say would deprive the party victory in the general elections and consequently the emergence of 'Stop Trump' movement.
The liberals and the anti-Trump members of his party and the propaganda against Trump have become so thick that many observers think that the hope for Trump's ambition for the White House is dying with sponsored protests against his campaign. Mitt Romney came out with a deadly campaign, with an aim to turn the electorate against Trump. He has failed.
But rather for the hope to die for Trump, the hope has been renewed after every election and the anti-Trump movement swimming in shame. The movement has been moving the goal post from Ohio to Wisconsin, to New York and to Indiana, postponing the days it will slow down Trump's momentum. It is what has made Indiana State - a cynosure of all eyes this Tuesday.
One of the candidates the party's establishment has adopted to stop Trump is saying he would win Indiana, despite the revelations from the polls that he is on his way out. The public is awed watching what is now termed Ted Cruz's argument against reality. Many observers are saying that it is not Cruz who is at the stake, but the party's establishment in which hands, they say, Cruz has become an instrument.
It is even so disgusting that Cruz's surrogates appearing on televisions arguing about a journey to Cleveland for a contested convention and not that Cruz will win the election. They all have agreed that Cruz has lost the election and he is merely holding to life and using expectation for contested convention as a life machine. The discussion now is whether the life machine will be switched off today for the Republican Party's establishment and its adopted candidate, despite hearing from them that the life machine may continue work through to California in June.
Another question is how the life machine will still be relevant, if Trump wins in Indiana and goes to New Jersey and West Virginian and win in all these states? It is why observers are saying that if Cruz loses in Indiana this Tuesday, it is over for him way ahead of California. The poll results from California is not even leaning in favor of Cruz anyway. Cruz is manifestly gone the way of Marco Rubio.
Therefore, today's election in Indiana puts Indiana as the decider of a contest that has begun with 17 contestants from the Republican Party, remaining just three of the contestants and two of them in a confusion about what to do to redeem their relevance.
By 2100 hours, the world shall know the direction the United States' general election will take with the result of the Indiana's election. John Kasich is out with the establishment's choice to cling to Cruz. Cruz is politically on life support. While the Democratic Party's contest  is expected to show whether Bernie Sanders can do anything yet to stop Hillary Clinton, making this Tuesday a Super Tuesday.
NEWS AND FEATURES
News & Features Around The World