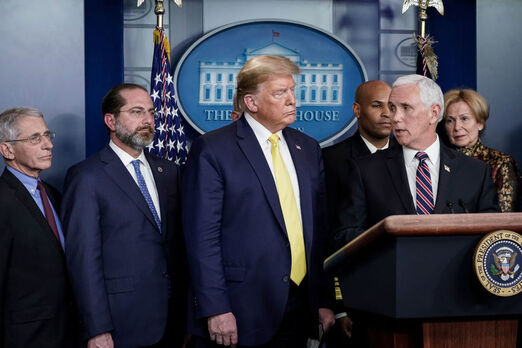 President Donald trump leading the Cornavvirus emergency with daily transparent briefings
Dow Jones economic index on Tuesday found a way out of losing and losing after days of losses and uncertainty among Americans about their savings and retirement plans.
This is happening on the heel of America's ability to lead and for the world to follow, in terms of economic and humanitarian concerns, based on news reports that the American Congress is busy discussing a stimulus to help Americans and businesses survive the Coronavirus' onslaught, a development yet to surface in other countries.
News reports filtered out that Italy picked a month rent for all Italians following the experience with the deadly Coronavirus. The American government decided to go beyond paying just a month's rent to stabilize everything that will in economic terms help the country and the people.
When the Italy's announcement to pay a month's rent to all Italians came out, there was no news of disagreement over the decision, unlike the American system where one cannot expect such an issue to pass without some forms of disagreements among American representatives in the Congress..
Based on news reports reports, Americans were already waiting for the stimulus money in the mail, when news reports said that the senators could not reach an agreement. News reports said that the Democrats said the Republicans' plan was not far reaching enough to help poor Americans and that the plan was aimed at helping the Wall Street businesses. The Democrats immediately released their own plan.
Monday came to an end without the Republicans' plan  getting a passage in the senate. Americans went to bed unsure whether the Republicans plan or the Democrats would be the savior of for the day. One thing was certain, the majority leader in the senate and the Republican senators have decided to remain in Washington until something was done to pass the stimulus to help the people So, the senators have remained in Washington parleying with the White House and the executive representatives on the stimulus package.
On Tuesday, the issue of disagreement became a source of public discourse. The Republicans revealed what the Democrats have in their plan outside the Coronavirus concerns instead of concentrating on the issue at hand. Many people who know the procedure of public policy process know that what the Democrats have done is about representation of the public that they represent. It is part of the public policy process of give and take at seizing an opportunity to getting problems that have not received favorable attention in the past  pass into a new bill certain to be passed.
However, with Republicans insistence on addressing the issue of the moment without personal or political interests standing between them and helping the public, Democrats have no choice than cooperate with Republicans to pass the Republicans plan and forgo their own plan, because their own political interests is manifest in their plan and capable of their own political journeying to November elections. Moreover, observers see no justification that the stimulus is targeted to helping the Wall Street businesses alone as claimed by the Democrats, because the money in the package to big businesses, aside from the assistance to small businesses, will be loans to be paid back, and this is done to ensure that businesses don't lay off workers.
Therefore, based on optimism that both parties have begun talking and that there is possibility the Republicans' stimulus plan may pass with some adjustments today in favor of the people, the market reacted favorably. America lead with good examples. China lost close to 4000 people. Yet, China has not been heard doing anything to help the people. The Waterloo for the Democrats will be failure to cooperate with the Republicans to pass the stimulus vote, because people are already awaiting the checks from the day that the reports hit the news stands.
HTML Comment Box is loading comments...
NEWS AND FEATURES
News & Features Around The World