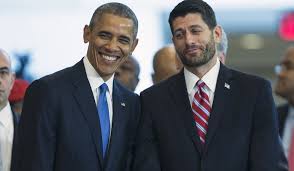 On Tuesday, Speaker Paul Ryan of the House of Representatives in the United States said that the Congress has finalized a bill targeted to repeal Obamacare and defund the Planned Parenthood Program. The speaker said that the Obamacare has failed and he described President Barack Obama's measure toward combating gun violence as a distraction, after he had mentioned the Second Amendment and some letters in the Constitution.
President Barack Obama has earlier delivered a speech at the White House on Monday to combat gun violence. The president has hardly completed his speech with tears running down his eyes, when the speaker of the House of Representatives, Paul Ryan, describes the president's speech as a distraction and affront against the Second Amendment and that the president's position may be challenged in a court of law.
Observers may not have been surprised at the speaker's immediate remark to President's Obama's speech, because many people also say the president's speech represents a direct indictment of the Congress.
How would the uninitiated have known that the president's decision to combat gun violence and the speaker's immediate response disagreeing with the president as part of the America's democracy without following analysts' discussions on the Cable television and recognizing that discussions by analysts on the television is part of the democratic system, notwithstanding that some the stations represent the liberal shade and some others represent the conservative shade?
President Obama openly demonstrates emotion as later contained in some news report . But one line among the president's statement as shown in specialists' discussions shows politics is also inherent in the president's effort toward combating gun violence, with the president's call on Americans to distinguish between politicians who are working to combat gun violence and politicians who stand on the way of combating gun violence on the election day!
One could understand that both politicians in the Congress and the White House are concerned about the level of gun violence in the country, but that the problem is about their disagreement on what to do to tame the Augean Stable. Some analysts have say  that it doesn't make any political sense for the Congress to bring the issue of the Obamacare at a time of election, while others say it is appropriate to make it part of the election.
Those who say it is appropriate say that the Congress knows that if it passes he bill and places it on the president's desk for the president's assent that they know the president will veto it, and that members of the Congress are making their effort to show Americans the failing of the Obamacare and to make it part of the election agenda.
NEWS AND FEATURES
News & Features Around The World