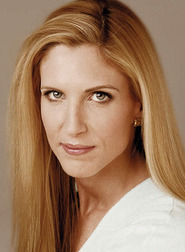 Ann Coulter
Ted Cruz and Ann Coulter are Americans; a male and a female respectively. One is a Republican senator and the other is a conservative commentator. Senator Cruz was the first who lampooned Nigerians in a widely published stereotyped statement and followed by the conservative commentator. The statement about Nigerians from the man and the statement from the woman about the Third world are manifestly over the top and what you hear often from people you think are uneducated. There is a need to know the man and the woman’s statement about Nigeria and the Third World, which have attracted condemnation from certain Nigerians, who themselves have embarked on unnecessary hubris, the original cause  of the disease that has given the likes of Coulter to malign innocent people.
What did Cruz and Coulter said about Nigerians? I will present Coulter’s statement, as being a little broader than Cruz’s statement for its incorporation of the entire Third World in a stereotype.
“The problem isn’t their complexion, it’s their culture. In America, we think only dumb people become criminals. That’s not true in the Third World! Nigeria, for example, leads the world in criminal enterprises. Every level of Nigerian society is criminal, with the smart ones running Internet scams, the mid-range ones running car theft rings, and the stupid ones engaging in piracy and kidnapping. At the University of Lagos, you can major in credit card fraud. There were almost no Nigerians in the United States until the 1970s. Today, there are nearly 250,000 Nigerians in the U.S. (committing the cyber-crime Americans just won’t do!). In 2011, we took in more immigrants from Nigeria than from the United Kingdom (9,246 from the U.K. and 9,344 from Nigeria). Of course, Obamacare never would have passed without decades of massive immigration from the Third World. Liberals didn’t change any minds — they changed the voters. In order to pass Obamacare, Democrats had to bring in the Third World to vote Democratic.”
Ted Cruz’s statement as a replica of Coulter’s statement does not require a repetition here. Actually, Coulter may have taken a cue from Cruz’s statement. In his apology, Cruz called his statement a joke and that his reference to Nigerians as scammers was not targeted at all Nigerians. But has not Coulter good education to realize her wrongfulness in employing stereotype against the entire Third World? Isn’t she aware that scammers are everywhere and that scammers are not exclusively belonging to any particular sphere of the world and that like corruption that they engender they can belong to any nationality ?
But based on Coulter’s writing which essentially represents her critical opinion on American politics with Obamacare and Immigration as the central issues, it is not only Nigerians who are supposed to be calling for a fight, but the entire Third World population in the United States and outside the country. She has merely cited Nigeria as an example of her view about the Third World. It was the stereotype that was the wrong and antidote. People with education will easily see that the lines on the Third World puts a question on  Coulter's credential and makes one to seek more information on her beyond her being a conservative blogger. Her wrong labeling of the entire Third World does not seem an issue more than than the implication of the exposure of herself as possibly a half-baked intelligent person. The code of ethics of the Society of Professional Journalists does not permit stereotyping and Coulter is not a professional journalist. Although professionally a lawyer, she has been employed by the MSNBC twice, and she has been thrown out of the employment twice for unguarded statement. Her stereotype is not an issue for anyone who is fully occupied to pick a fight over. Coulter's opinion about Nigeria and scam does not bother me, because people say it to my face every time. I try to let them know it is their opinion. Even after Coulter's publication, someone has told me after identifying me as an African that we are scammers. But I laughed it off, because I knew the guy was ignorant.
Are not Nigerians also in the same manner of wrongly referencing a large number of themselves as scammers against what has become their inability to identify the rogues among themselves who have given Nigeria the bad image that Cruz, Coulter and others have seized upon - in ignorance - to stereotype the country? It is nothing short of hubris to because of this begin to roll out the names of Nigerian achievers or Nigerians’ achievement abroad to cover up a sinister that needs to be addressed, more so at a time that corruption has become Nigeria’s second name back home. Has not some among us make scamming to look like a culture back home? There is nothing wrong in defending one's country against wrong labeling by people like Coulter, but it is wrong to apply an act of ostentation, which naming achievers and achievement against the falsehood that only needs correction represents. Isn't ostentation - showing off of wealth - and a drive  to be like  achievers who show off their wealth, (mostly questionable moneyed people in the society, who receive the attention of praise singers) that has made many people to take to the life of crime and has been helped by unavailability of the rule of law?
Coulter and others like her may be ignorant of the facts, and that should not make us to embark on what is a more dangerous exercise of praise singing. Coulter's problem is about the politics of Obamacare and Immigration in the US; we should be talking about how to stem the tide of the rush abroad and enforcing the rule of law to punish the scammers in high places, so they no longer will be role model for the less privileged as currently obtained and everyone is seeking to be relevant no matter how unethical.