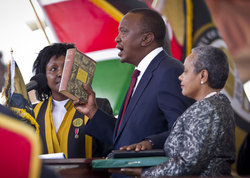 Kenyatta taking oath of office
The African Union, A.U, has said that the International Criminal Court, ICC, cannot adjudicate in the case against President Uhuru Kenyatta and deputy, William Ruto. The two men have been scheduled to face trial in The Hague this July for alleged crime against humanity emanating from political disturbances over Kenya’s 2007 presidential election, resulting in the loss of over 1000 lives.
After the 50 years anniversary celebration of the Pan African organization, the Ethiopian prime minister, Hailermariam Desalegn, announced that the AU is opposed to the trial of the two men and that it wants the case refer back to Kenya. Prior to the AU’s expression of opposition to the trial of Kenyan president and his deputy in The Hague, the Kenyan Government was reported to have written to the UN asking it to tell the ICC to drop the case against the men.
“The intention (of the ICC) was to avoid any kind of impunity and ill governance and crime, but now the process has degenerated into some kind of race hunting. This shows something is flawed within the system of the ICC and we object to that,” Hailermariam said.
Observers see these developments- Kenyan government and the AU's interventions- as opposite of what they describe as President Kenyatta and his deputy’s promise to cooperate with the ICC in the case against them after winning the country’s presidential election in March 2013. They ask whether the Kenyan government writing to ask the U.N for the ICC to drop the case or the AU expressing opposition, saying ICC has become a witch hunt against African leaders do not antagonize Kenyatta and Ruto’s earlier promise to cooperate with the ICC.
Although, President Kenyatta and Ruto have not personally come out to challenge the ICC’s Julyschedule for his trial and nor has Ruto, since both men have pledged to cooperate with the ICC. Immediately after their election as president and vice president of Kenya respectively in March, both men pledged they will cooperate with the ICC, and the ICC has been making arrangement toward ensuring the trial will not impede their work to their country.
On March 9, 2013, Yahoo News reported that Kenyan president – Uhuru Kenyatta – who faces international charge of crime against humanity, said in his acceptance speech on Saturday after his election win that he and his team would cooperate with international institutions. On the same day, a voice vouching for President Kenyatta said in a Bloomberg’s report that Kenyatta said he will cooperate from the beginning and use the local channels and that he is no comparison to Bashir on that front. The voice said further that Kenyatta has been a minister of finance and he knows the importance of international community, so he does not think he can antagonize the community.
On May 14, 2013, addressing the delegates at the World Economic Forum in South Africa, President Kenyatta reiterated what he had said immediately after his election that he will fully cooperate with the ICC and clear his name. The report was published by the Kenya’s Daily Nation. On the same day, a report by Reuters revealed that during a pre-trial session, William Ruto promised the ICC that the president would cooperate despite calling their charges over election violence the result of a conspiracy of lies.
Observers are saying that if after all their promises to cooperate with the ICC to clear their names, the Kenyan Government and the AU posture showing lack of cooperation will only send a wrong signal about Kenyatta and Ruto’s integrity.