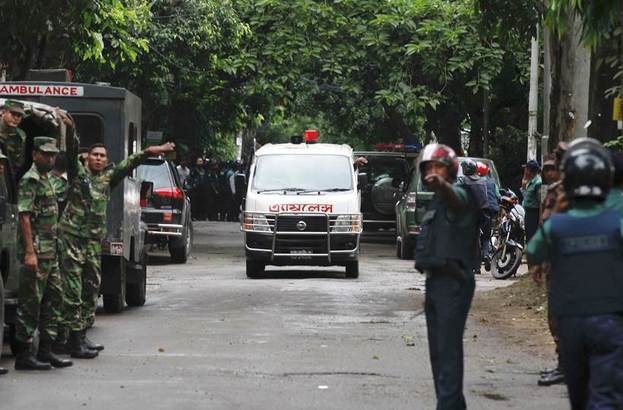 An ambulance responding to the emergency in Dhaka, Bangladesh.
20 foreigners were killed by militants in the attack on Holey Artisan Bakery Cafe in Dhaka, Bangladesh, on Friday, the country's army had announced.
"What kind of Muslims are these people?" Bangladesh Prime Minister Sheikh Hasina queried, following the discovery of the manner the terrorists used in the brutal killing of their captives in the besieged cafe, using sharp weapons.
"They don't have religion," Hasina further said, in what seems act of denial for Islam.
Yet, the Bangladesh Daily Star reported that the gun men who held their captives hostage, tortured anyone who was unable to recite the Quran! Hasina is further reported as describing the killers' act as heinous, according to the BBC.
Curious observers say that Jihad - the act carried out by the killers in the name of Islam is heinous, because the Quran, which the terrorists rely as their source of instruction does not exist in vacuum and that it is from the book the killers derive lessons for their act.
Reports show that Italians may have been in majority among the victims of the Bangladesh attack, which the Islamic state said it masterminded.
The same Islamic State inspired terrorists killed over 40 people in Istanbul,Turkey, few days earlier. While in Orlando in the United States, about 50 lives were lost to the same ISIS ideologues, less than a month before the Turkey and the Bangladesh attacks. The horror had begun in Paris, moved to Brussels in Belgium. Now, no one knows, where the terrorists will strike next.
Everyone is in fears, from the U.S. to Africa, where the U.S. Intelligence has warned American travelers to not go to part of old Mombassa and avoid traveling in a Ferry across a particular river. Meanwhile, John Browne, the CIA chief, had warned about the possibility that the Islamic State may try to carry out an attack in the U.S, in the form of what the world witnessed in Istanbul.
Security is reported to be tight at every airport in the country and other areas that terrorists may want to use as soft targets. The Islamic State seems to have devised a formula, where it employs hard honed terrorists in places its operatives have easy access, while in places like the U.S., where it uses home grown terrorists in a place like the U.S., where it is a little difficult for its hard honed operatives to penetrate.
But whether the terror organization uses its hard honed militants or home grown terrorists, the continuous loss of lives is what matters to people in countries affected by these attacks.
NEWS AND FEATURES
News & Features Around The World