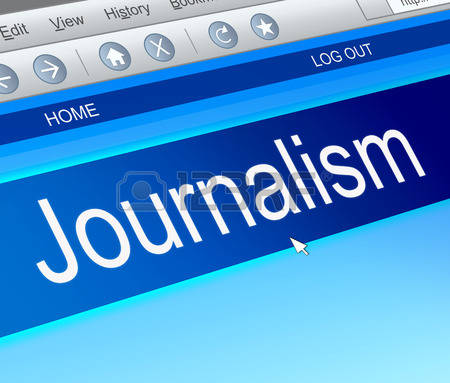 Journalism (Courtesy:123RF.com)
Andy, the Sunday editor of a major newspapers in his country, steps out of his office with a glass of beer and a stick of cigarette, in his hands, pushing his protruding stomach forward.  The bottle or glass of beer and the cigarette are his hallmarks, and the pen is always hanging somewhere, between the hair on his head.
Before his appointment as editor of the newspaper, he has been a political editor for several years and writes a column every Sunday for the paper.  An editor, whom the government that controls the newspaper does not trust as their own political guy, not for professional distrust, but for impossibility of using him to advantage, has been shuffled aside, to pave way for Andy.
One Sunday, the newspaper that Andy edits hits the newsstand with a blatant and glaringly false story. It is the type of story that every newspaper have covered and the lead story for all newspapers for the Sunday. But Andy's own story is different, though the same topic like the one in other papers.
There is no way the falsehood of the Andy's paper's report can be hidden. Every worker in the newspaper sees the evil that politicians, whose decision favor Andy to edit the newspapers has done to the paper's integrity. It becomes the talk in the premises, where politicians rule and edit the newspaper in the dark or by remote control and Andy merely a figure head.
Not all editors are like Andy. But there are certainly some like him in the profession, who have become turncoats for the sake of fame and money. For the sake of fame and materials, some will serve their publishers or proprietors than serve journalism. In these days of breaking news journalism culture, the race to fill the pages of newspapers in the face of lack of sufficient news materials for the news breaking culture, the urge to serve and  please the publisher or political godfathers, are not without journalists' attention drawn for the need to for them to avoid serving the profession, rather than the politicians or the publishers.
There is also the urge to surpass every other newspaper, magazine, television and  radio with jaw breaking scoops, which  lift editors and reporters beyond the level of mere mortals. But it is not without sacrifice of getting jailed for the truth.
Although,  scoops are ethically acceptable in journalism for spreading of the truth, which individuals or governments don't want circulated, while others may be complete falsehood and work of political propaganda, sold to journalists and reporters who lack enough experience and the connections to make necessary verification work before publication.
Every journalist wants to be called investigative reporter or be seen as an enterprising journalist, and becomes the toast of the society. There is nothing wrong with following your training in verification before publication and be ready to go to jail for the truth. It is part of the training to be responsible for publishing classified materials that are truth in content, devoid of unnecessary propaganda and the urge to destroy others, without any link benefiting the society or humanity.
It is for this reason journalists and reporters go to jail in defense of the truth. Published materials must be true and verifiable, and despite this, the journalist and the reporter can still go to jail. Isn't it better to go to jail for the truth, than being the Andy of this world in a newsroom, whose conscience may have been sold to the highest bidder, but who still parades himself as a journalist?
Names of those who have made the profession proud by sticking to the tenets of the profession and those who have rubbished the profession are separately catalogued for studies. The moment a name falls into disrepute and the integrity lost, it may the end for such a practitioner and the newspaper that he or she edits, And this punishment serves a justifiable remedy to redeem journalism profession from the claws of professional turncoats.
NEWS AND FEATURES
News & Features Around The World