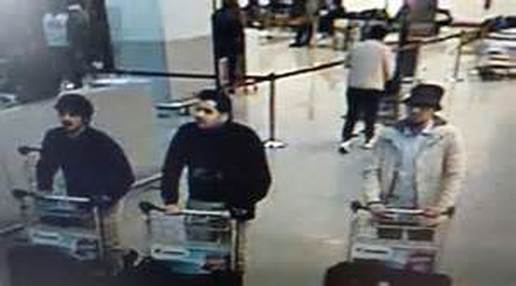 The two brothers are on the left, the wanted attacker is the right.
The police in Brussels have released a photograph of three men caught on camera at the Brussels' airport and believed as behind Tuesday's terror attack.
One of the men is reported to be on the run and he is wanted by the police. Two of the attackers, described as brothers, who reliably carried out the attack at the airport, were said to have been on the police wanted list, before the attack.
Meanwhile, 31 people have been confirmed dead and 270 wounded in an early morning terror attacks in Brussels, Belgium, on Tuesday. The ISIS has claimed responsibility for the attacks.
The news of the attack in Brussels Airport and the Metro Center came as a big surprise to people around the world, who think it is hard to believe an attack still happen, despite the arrest of Saleh Abdelslam few days ago in Brussels.
Unanswered questions are whether Abdelslam's arrest or the European Union's new regulation to return newly arrived refugees back to Turkey had been a motivating factor on the part of the Jihadists.
President Barack Obama has expressed the support and solidarity of the people of the United States with Belgium. He said that the U.S will do everything possible to get the perpetrators of the attack in Brussels, in cooperation with all nations, irrespective of religion and culture.
President Obama spoke from Cuba, where he is currently on an official visit. Meanwhile, the talk shows have begun on television stations over the attack in Brussels, the readiness of the police across the U.S to ensure defense against terror attack and various presidential candidates have spoken about what they will do as president to confront the terrorists and stop the nuisance that terror has become.
218 families in Belgium and around the world are currently reeling with the pain of the attacks in Brussels, which they had least expected would befall them, when they went to bed on Tuesday night. Many observers who woke up around the world to the news of the Brussels' attacks felt that it was unbelievable.
One attack at 08:00 a.m and another one at 09:00 a.m at different locations, two days after the European Union and Turkey reached an agreement to return all refugees from Syria and Iraq to Turkey, with the fear of hardened individuals being imported to European capitals by the ISIS as one of the reasons for the rejection and turning back of the refugees, is highly disturbing.