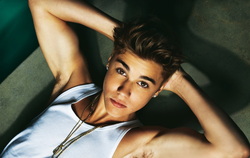 Justin Bieber
Justin Bieber has just released a new number 'Bad Day' amid news of his experiences of bad days during a tour of South American countries. During one of his shows in Argentina, bottle was reportedly thrown at him and resulting to his leaving the stage. There have also been reports of developments that tend to cast the young star in bad image. Some observers have attributed these reports to acts stemming from youthfulness and fame. They say that they are acts ordinary people will commit and no one will hear any news about them. They say it is the price Bieber has to pay for being famous.
The fans say his music tends toward love and broken hearts and suffering from what great people are inclined. ” Was he born great; was greatness thrust upon him or achieved greatness? The latter sounds perfect. With greatness comes fame.
He is famous among the youths as well as the adults of both sexes and he is just nineteen! He is the epitome of the Shakespeare’s words, “If music be the food of love, play on.
“Bieber sleep with a prostitute,” the news say, and pundits have been working hard to attach a moral tone of what that could mean to his teeming young fans.
"But is Tina Neves – the young woman who claims to have spent a night with Bieber a prostitute?" some Bieber's fans have asked. They said that reports said that she said she was invited to a party by a member of Bieber’s entourage, but was fortunate that she was noticed by Bieber who asked her to stay when he dismissed others.
Neves said that she admired Bieber’s nakedness. She felt it was a great opportunity to have shared the night with him. Neves herself is not a push over, looking at her curves as it appeared in published photographs. People are asking about what is about a teen having it his own way after a broken heart experience. They say it is one bad day leading to bad days, but that as Bieber grows and gain experience he will learn to settle down for his own and society's good, because he is certainly will become a model for young people.
No one has given Bieber a chance or consider that he is a bachelor and human too. Is it not part of being human to be imperfect?
As he sang on stage in Bueno-Aires in Argentina, reports said he announced that he could not continue, blew kiss to the crowd and walked out of the stage with his head bowed, and followed by boos from the crowd who had paid $320 to be at the show. And Bieber had played for just one hour. They loved watching Bieber playing and they could not understand why he left just after one hour.
Reports later said that Bieber had stomach problem that arose from food poisoning. If Bieber sneezes, it will be in the news; if he goes wrapping himself with blankets, it will be in the news and whatever he does will be in the news. Fame, thou are responsible.