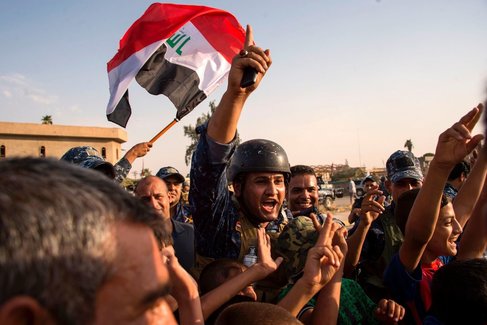 Iraques celebrating in Mosul
"Shall the sword devour forever? Knowest thou not that it will be bitterness in the latter end?" 2nd Samuel 2:26.
Reading these words, recorded after the civil war between the house of Saul and David, while it was said that the house of David waxed stronger and stronger and the house of Saul became weaker and weaker, thoughts about strife and devastation came into the observation.
I win the election. I have more votes than you. No, the election has been won by the help of the Russians, and we will have nothing to do with this election victory.
It is not the house of Saul and the house of David here, but the house of Trump and the house Clinton, represented differently by the Republicans and Democrats.
Attention has almost been taken away from terrorists attacks by the events in the United States and Britain, in Britain  over the decision of Britons' votes to leave the European Union, before the terrorists resumed their attacks in Britain, echoing same unhappy events in France, Belgium and Germany. Although, Boko Haram has been silent in Nigeria, but they still kill and more than half of the the poor girls they forcibly took away still in their custody.
The affairs in the U.S. in the u.S. is nothing but catastrophic. Republicans have stalled a democratic administration for eight years, and the Democrats had vowed a revenge, aside from their mention of Russians' alleged intervention in the elections. Protests have become louder and louder than ever to stall government programs.
Just as the protests seemed to be quietening in the U.S., it resumed with a bang in Hamburg over the meeting of the leaders from G20 countries. The protest in Hamburg made the protests in the U.S. looked like a child's play. While the trouble in Hamburg lasted, Kim Jung-un continued with his testing ballistic missiles, releasing one that reports said was capable of reaching Alaska in the U.S.
The war in Syria came into attention. A ceasefire came into place amid suspicion and power play and uncertainty about whether the ceasefire will not be broken like the ones before it.
Immediately after Hamburg, the trouble in Mosul in Iraq came into focus. The ISIS has been defeated by the Iraq army. The Iraq leader formerly declared victory with pomp and pageantry. Though, Mosul has been ruined almost beyond repairs and it will take sometime for residents there to be resettled. Why the celebration of defeat over evil?
At least Iraq is certain that Mosul - part of its territory - has been regained and restored back to the Iraq main stream. Still, it is uncertain whether or not the ISIS will not embark on a revenge. The same ISIS defeated in Mosul, accepted responsibility for the killing of soldiers in Egypt, the same week.
Vengeance is mine saith the Lord, the scripture says. And the good book advises against vengeance. But humans are following their own ways. The book says everyone have gone their own way. Stiff necked. Lacking understanding. Competing with God. Always acting with vengeance
One major lesson from 'Beowulf' - an old English epic poem, is the evil of vengeance and its devastation of the human society. It has turned into a sword that is forever devouring. You have wanted to destroy me. Now I have prevailed, and  let us see how I will not deal with you. In Nigeria, the message is conveyed with how the jackals will be ejected from the kingdom.
Thrice, David got opportunities to kill Saul, but spared his life. But saul pursued David to kill him at all cost, but lost his own life instead. The world does not emulate David, but prefers to embrace Saul's spirit. There lies the world's doom.
NEWS AND FEATURES
News & Features Around The World