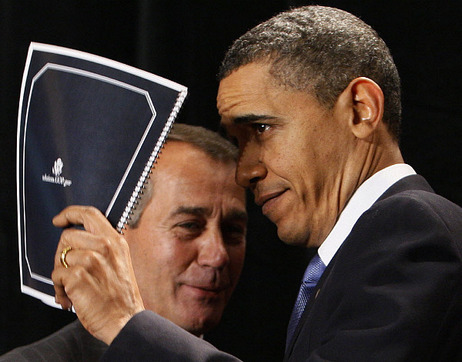 Boehner and Obama
President Barack Obama and the Democrats are suddenly in a mess they hardly thought could be their lot, when they overwhelmingly passed the Affordable Act bill in 2010 without a single Republican Party's vote. The Republicans cried hoax. They said that the bill ought to be allowed bipartisan attention. But to the Democrats, bipartisan could go to hell as long as they controlled the House under Nancy Pelosi.
At the time, the Republicans said the number of pages in the Affordable Care Act was too enormous to be passed in a hurry and that there was a need for meticulous perusal to avoid costly mistakes.
Today, the Republican Party’s warning has come to fulfillment. President Obama has apologized to millions of Americans who have been affected by costly mistakes in the law empowering the Affordable Care Act and promised a fix. But people in the health insurance industry are saying that the fix promised by the president could be difficult to achieve and may drive the price beyond reasonable expectation.
The development is causing a whole lot of chatter in the polity from the need to postpone the effective date of the health insurance to a possibility of the Republicans having their way to tinker with what they already had expressed unreserved opposition. Now, with the support of 39 Democratic Party members of the House, a bill has been passed that will allow insurance companies register those disenfranchised by the Affordable Care Act. Some people are saying the new bill is likely to be killed in the Democratic Party's controlled senate. Other pundits say whatever happens with the bill in the senate will not change Boehner and his party's vindication over what they have been saying about the affordable care act from the beginning of Pelosi's house rubber stamping of a bill with its entire unknown.
President Obama is saying that he is ready for a fix and that he will veto any bill that is targeted toward the law’s termination. He says despite the faux pass in the Affordable Care Act,  millions of Americans who hitherto lack health insurance are now being covered. The question this raises is why the president and his party’s choice for rushing the law in the first place. Why did not they listen to the opposition concerning the deluge pages of the law and the difficulties of browsing and reading through the papers, and the need for a thorough job to avoid the type of hiccup that confronts the nation over the need to extend the health insurance to all?
Now, many Democratic Party law makers are reported to be fearful of what this development could cause them in the mid-term election next year. The New York Times in a report on Sunday showed the uncertainty that stares some of the party’s law makers in the face arising from the Affordable Care Act. According to the report, a growing number of voters had said they wanted the Democratic Party to control the Congress coming as a result of the government shutdown impasse against the Republican Party. Suddenly, the problem with the Internet–based health exchanges emerged and followed by millions of letters from insurance companies that cancelled individual policies and here Republicans found their voice.
The report says that the polling gap created between the Republican Party and the Democratic Party by the shutdown in favor of the latter has closed and the  Republican wallets have opened!
However, some Democratic Party law makers who voted for the law are still expressing lukewarm optimism that the problem with the law will be resolved, while they continued working. But the fear of the political Armageddon that this development represents sends a lesson to politicians that it is good to want to prove that one is politically relevant but not at the risk of the electorate and ethics. The electorate can be fooled, but that in every human interaction, the ethical consideration might never be bypassed without having to pay appropriate penalty.