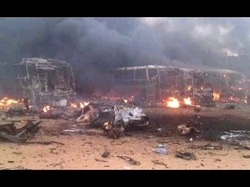 Boko-Haram, the Nigerian Grendel has struck again, killing about 70 people on Monday at a busy motor park in Abuja, Nigeria's Federal Capital Territory.
Another dark day for Africa's most populous country, besets with life threatening political and social issues.
One of of the reasons about 500 Nigerians have gathered in the city, to proffer solution to the country's seemingly intractable problems.
Boko-Haram, like 'Grendel' in Beowulf, is known to strike with a trade mark of butchering its victims, with an aim to discredit the country's president and the government.
The Butchers have returned to Abuja after government forces have kept them away from the city, and innocent school children in the north east of country have been victims slaughtered in their sleep. There is an unconfirmed information about 100 school girls abducted from a school as we
report.