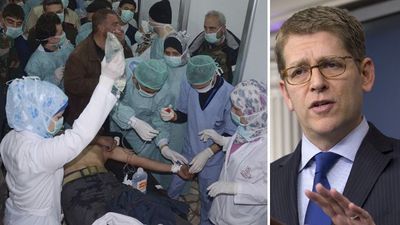 Early this week, about 50 people lost their lives in separate bombings in Nigeria and Syria. The two incidents have been ascribed to car bombs and chemical weapons respectively. The one in Nigeria by terrorists who say they hate western education, and in Syria by yet unknown combatants, because chemical bombs have been mentioned.
The United States says it is investigating who among the combatants may have used the chemical weapons amid denials by Bashir al-Assad's government and the freedom fighters. Jay Carney, White House spokesman was straight forward in his assessment of situation in Syria,"We are skeptical deeply of the regime that they might make that charge given that it has lost all credibility in the eyes of Syrian people and the world."
No one is certain if indeed chemical weapons have been used in Syria, but the intelligence community is busy working to determine the truth or otherwise of the statement about the use of chemical weapons in the war torn country. Does it mean that because people are worried about the use of chemical weapons that the use of ordinary bombs are acceptable?
The question arose in the sense that there was a bomb attack in Nigeria that killed about 22 or more people, almost the same number of people killed in Syria. But no one is talking about the situation in Nigeria where mere mention of a bomb has become a source of fear. The reason the world is concerned about the use of any weapon beyond the ordinary bomb, some pundits say, is because of the possibility that anything beyond the ordinary bomb is capable of silencing large number of people beyond the geographical area of its source.
Like the bomb, there are ordinary guns, and there some guns that are more dangerous than the ordinary guns. The ordinary guns, based on discussions about guns these days, are low in capacity in comparison to more dangerous guns like the semi-automatics that are high in capacity. However, just like bombs, whether chemical or not have capacity to kill, the fear of the more dangerous guns like the more dangerous chemical weapons have become real.
Just last week, the U.S said it had decidedly increased the capability of its defense missiles against possibility of North Korea's Kim Jong-Un carrying out his threat to attack the country. Amid efforts to ban assault weapons and make access to weapons more difficult, the chief of Colorado prisons, Tom Clements, was reportedly gunned down in his home. There was also a report that the drive toward national assault weapons ban ran into trouble on Tuesday when the Senate Majority leader, Harry Reid, said there wasn't enough support for it.